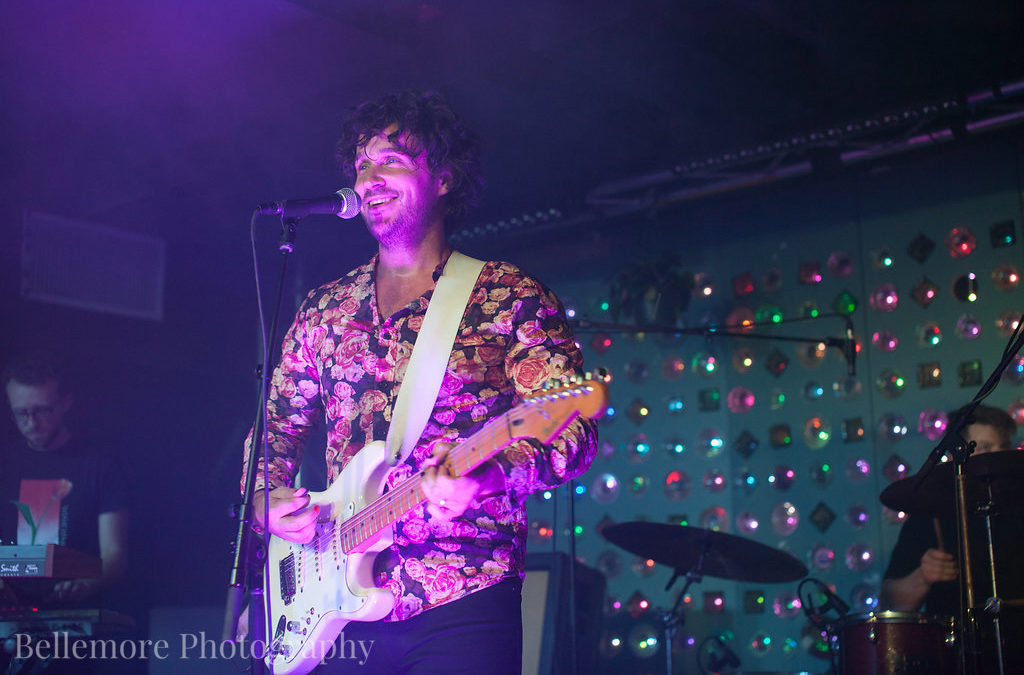 This Valentine’s day, a packed house at Baby’s All Right in Brooklyn, NY got treated to a very sexy show from Caleb Hawley. The week before, he leaked his Sex Tape, which is not at all what you are thinking and in reality is a 5 song EP meant to listen to while getting busy. He promised us a sexy Valentine’s Day show and that’s what he delivered. 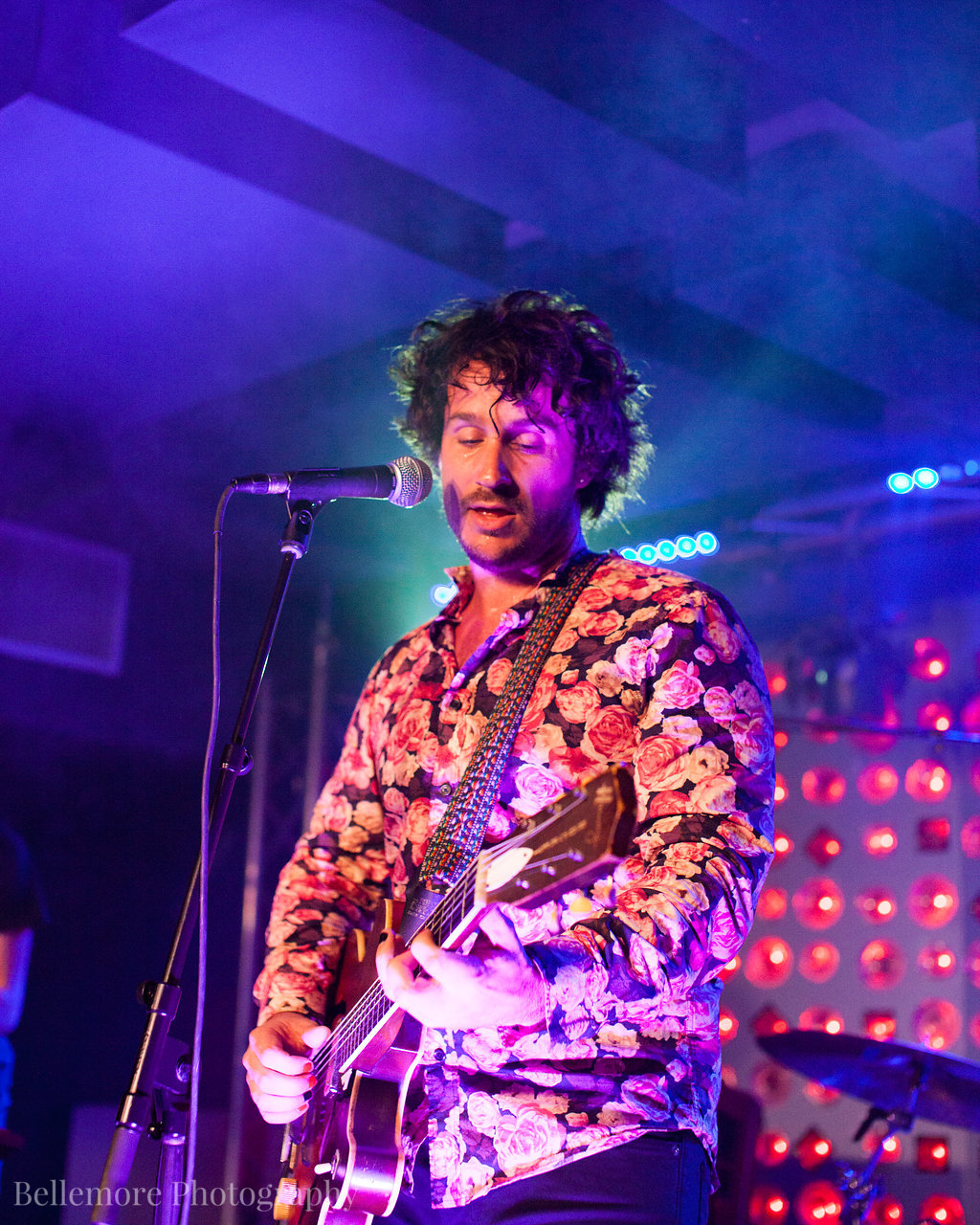 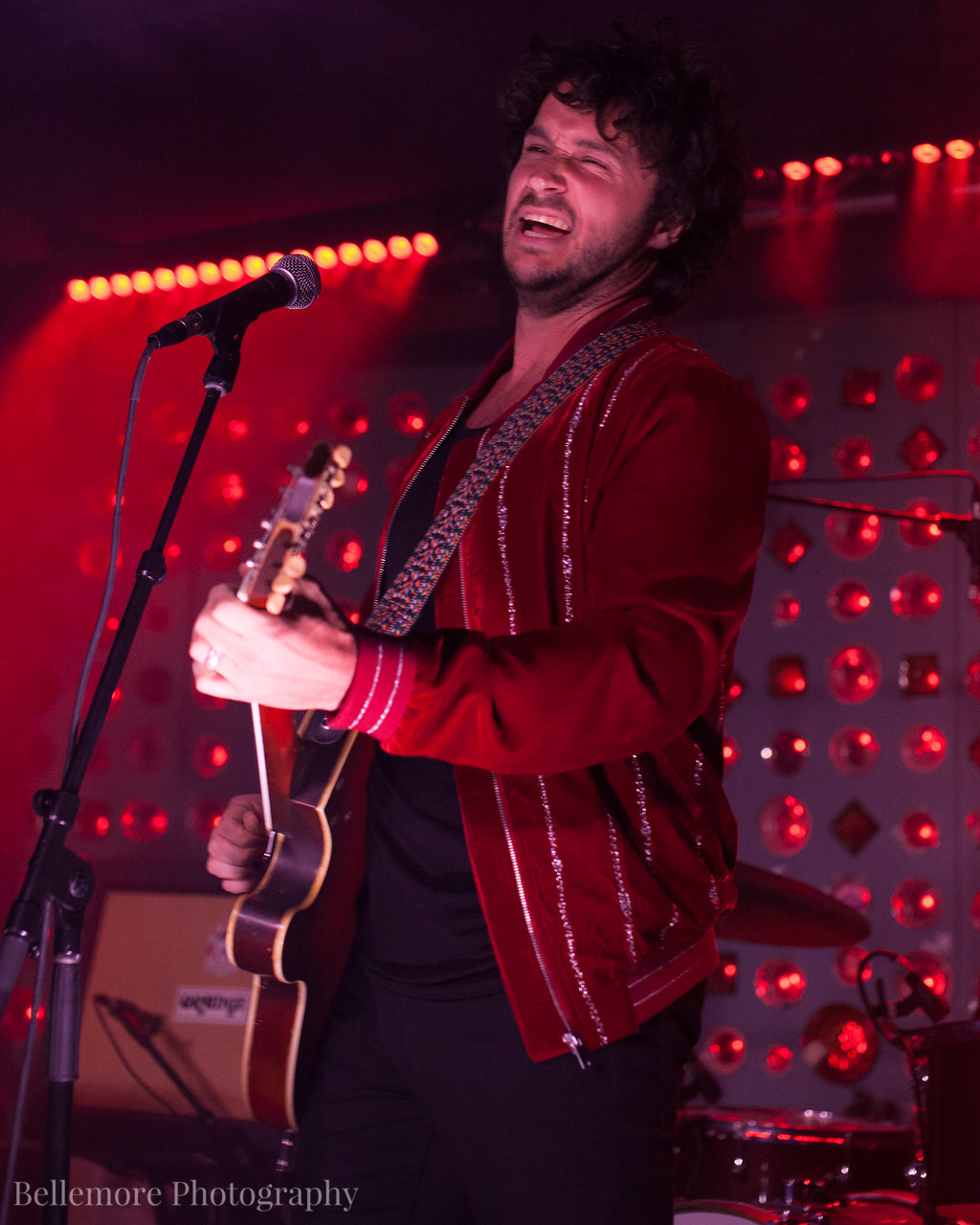 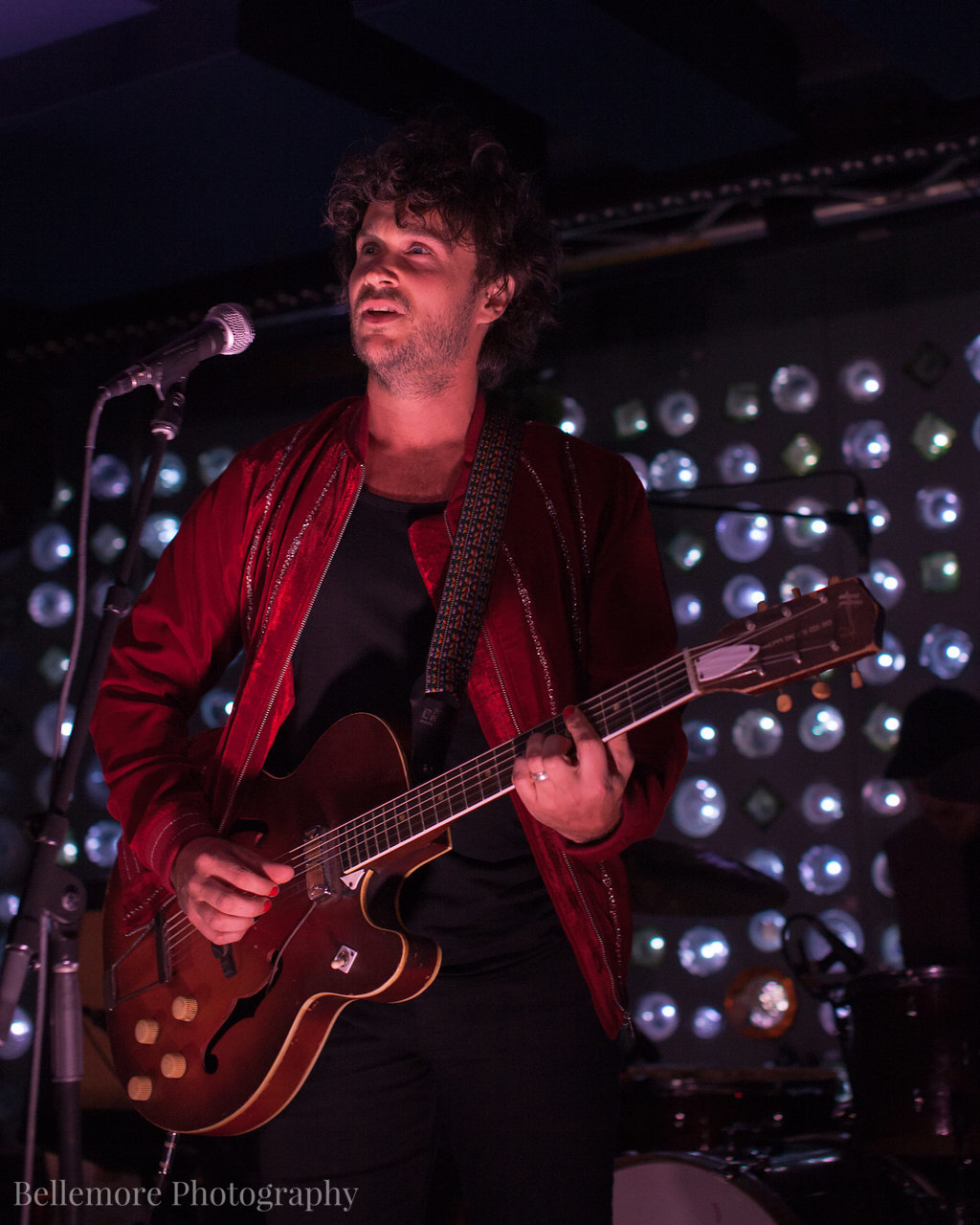 As Caleb took the stage, he explained to the audience that he usually likes to come on  stage in a big, over the top way, but since this was Valentine’s Day, he wanted to take it down a notch and sang a really sweet song that he wrote a while ago about not being able to afford candy and roses on Valentine’s Day and can they just skip it this year. I think it resonated with a lot of people in the audience, because who hasn’t had one of those years where you and your significant other just decide to skip the gifts? This was particularly meaningful for me because as he was singing this, my husband was at home unloading and loading the dishwasher for me instead of wasting money on a material gift. I came home late at night after the concert to a sparkling clean kitchen and I have never felt more loved.

If you’ve ever been to see Caleb Hawley live, you know that his shows are full of energy and usually a few surprises. This show was no exception. To set the sexy Valentine’s Day mood they turned on every red light they had in the venue and bathed the place in haze. What happened next couldn’t even be shared on Instagram because of its nudity policy. Caleb sang his cover of “You Sexy Thing” and treated everyone to a mid-song strip show in which he knocked over a mic stand while gyrating and twirling his discarded clothes. (Thankfully, Tomek Miernowski, who was playing guitar for him that night, caught the mic stand.) At the end of the song, he ran off stage, did a quick change and came back in another appropriately holiday themed shirt. 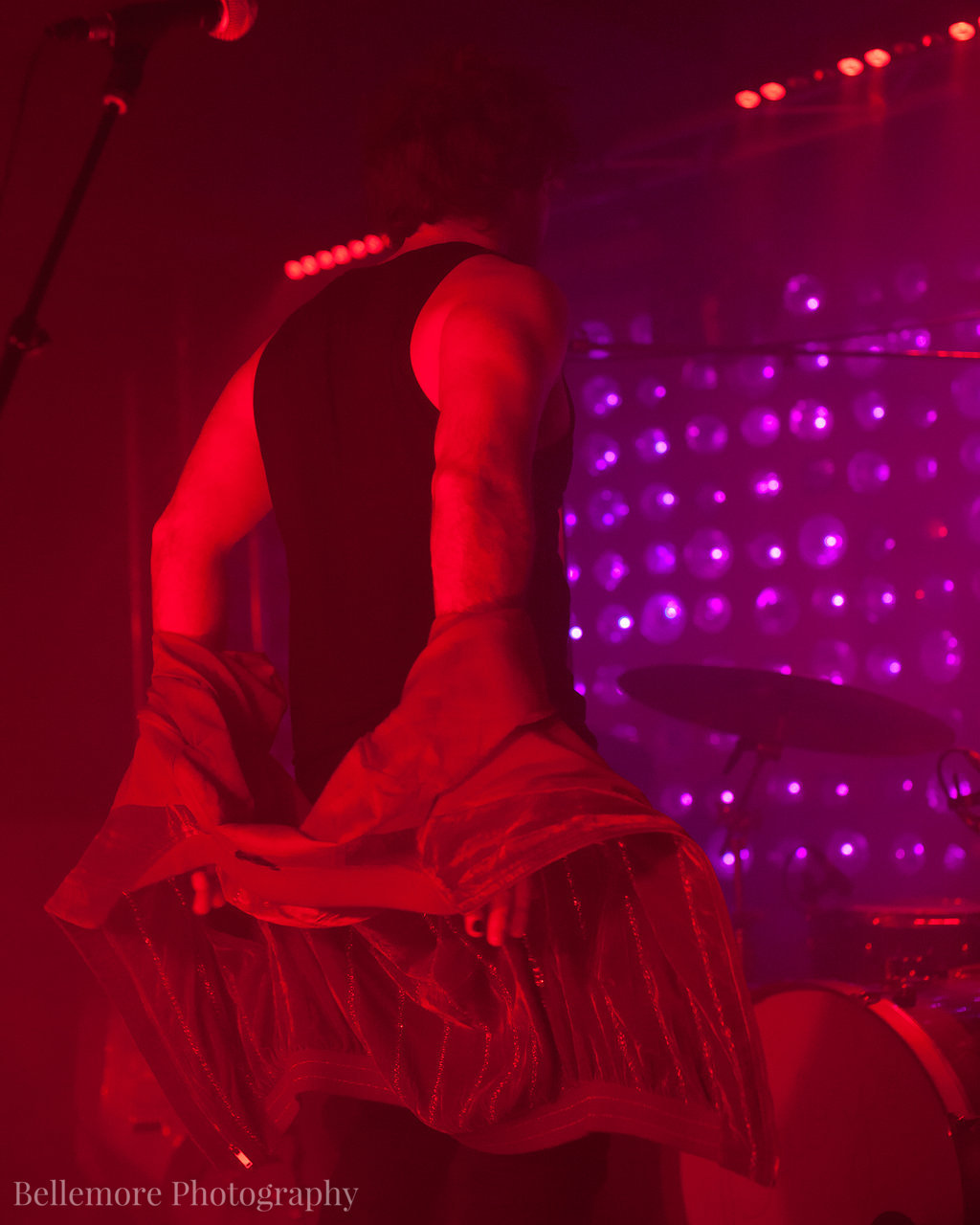 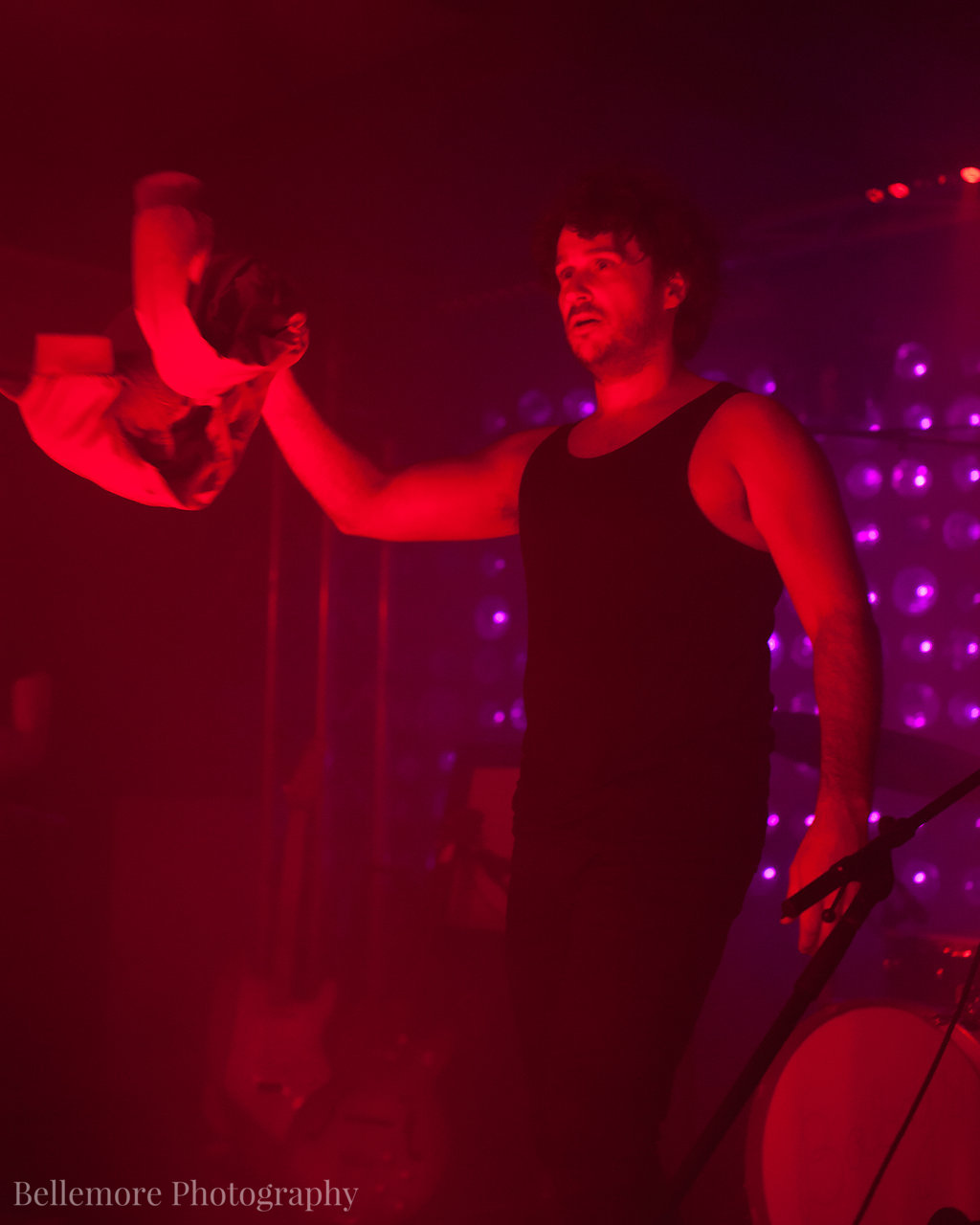 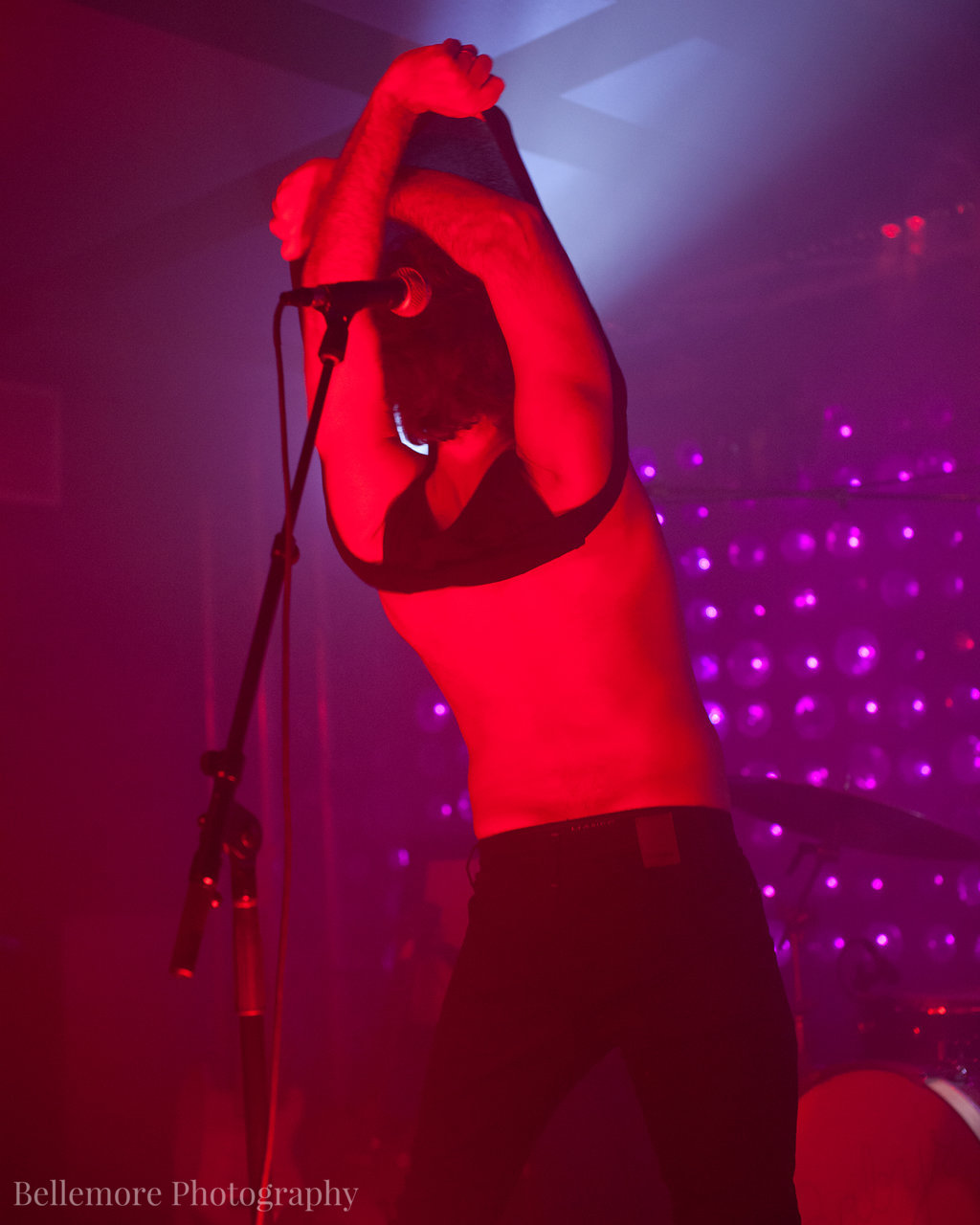 That’s all you get so I don’t violate any nudity policies… Seriously though, if you haven’t seen him live, you need to find out where he will be next and buy a ticket. Now. I’ll wait. 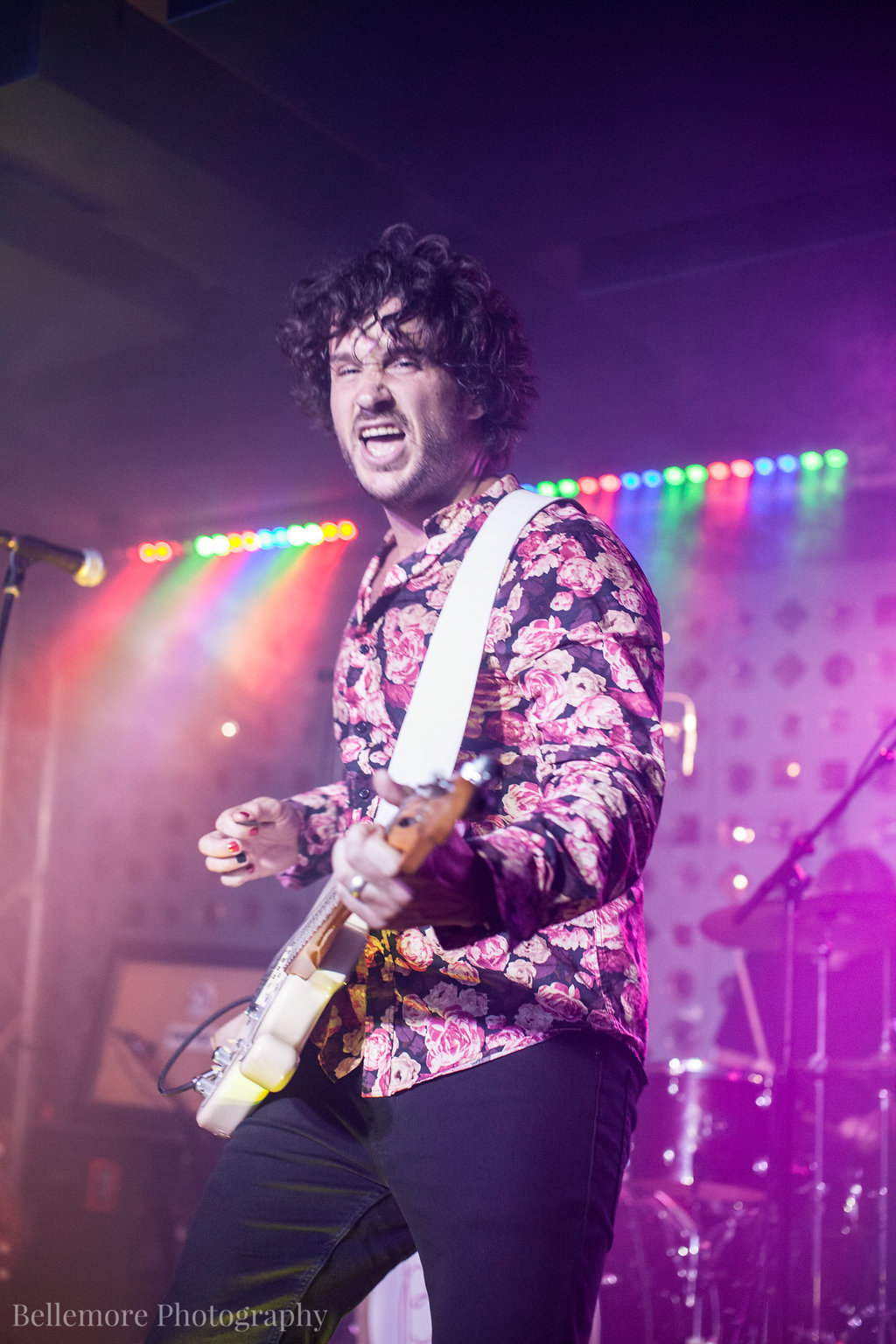 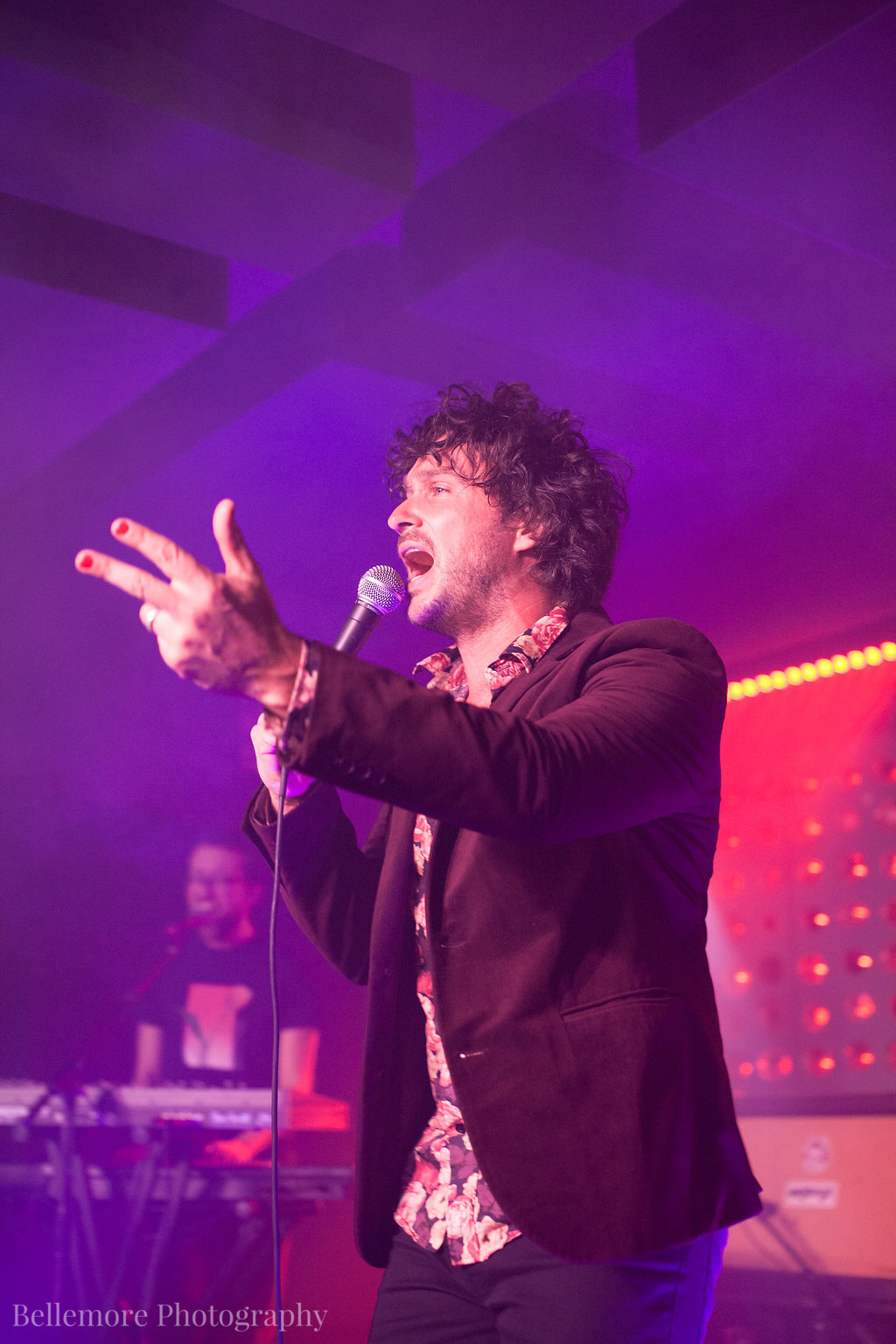 I’d like to say that the strip show was the “climax” but I can’t. At one point he went down into the audience and walked around serenading everyone. He then perched himself up high above the crowd to finish the song. His theatrics know no limits and the crowd seems to enjoy every minute. 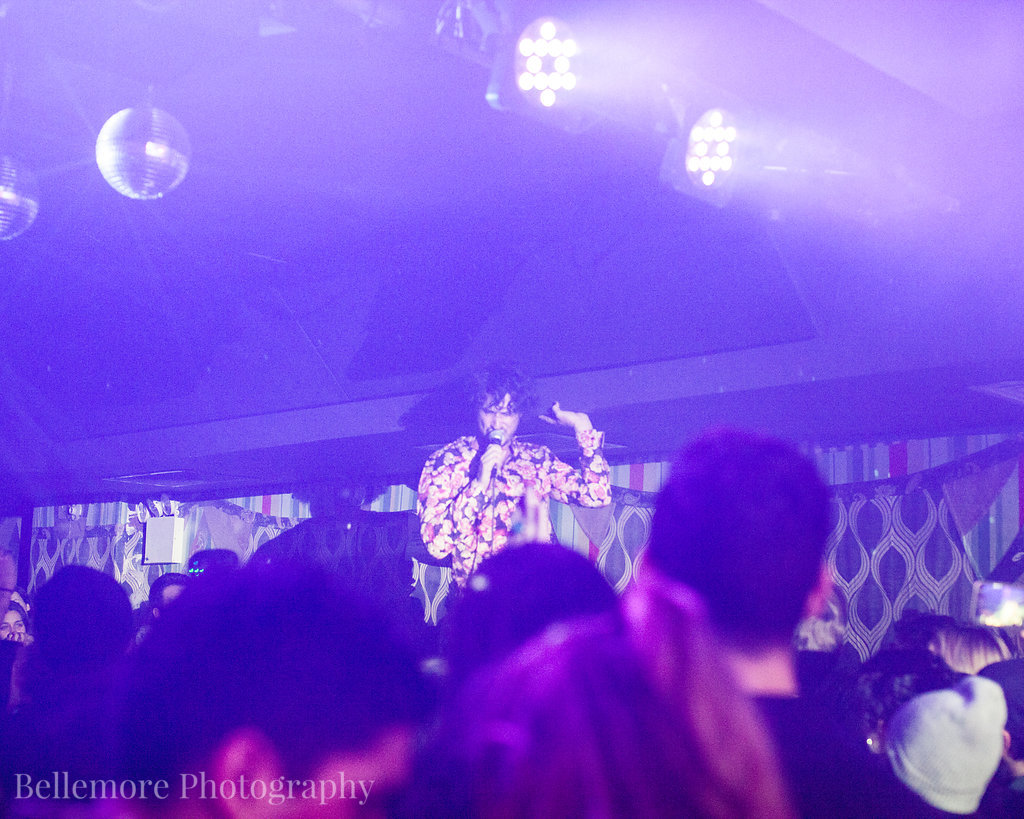 Caleb was joined on stage by Devon Yesberger on keys, and even though Devon has seen Caleb’s antics plenty of times, he still laughed and smiled and looked like he was having the best time watching his friend perform. Jordan Rose, who is joining Theo Katzman on tour next month as one of his “Four Fine Gentlemen,” was on the drums. Aaron Liao was on bass and one of my favorite NY musicians and fellow photographer, Tomek Miernowski, played guitar. 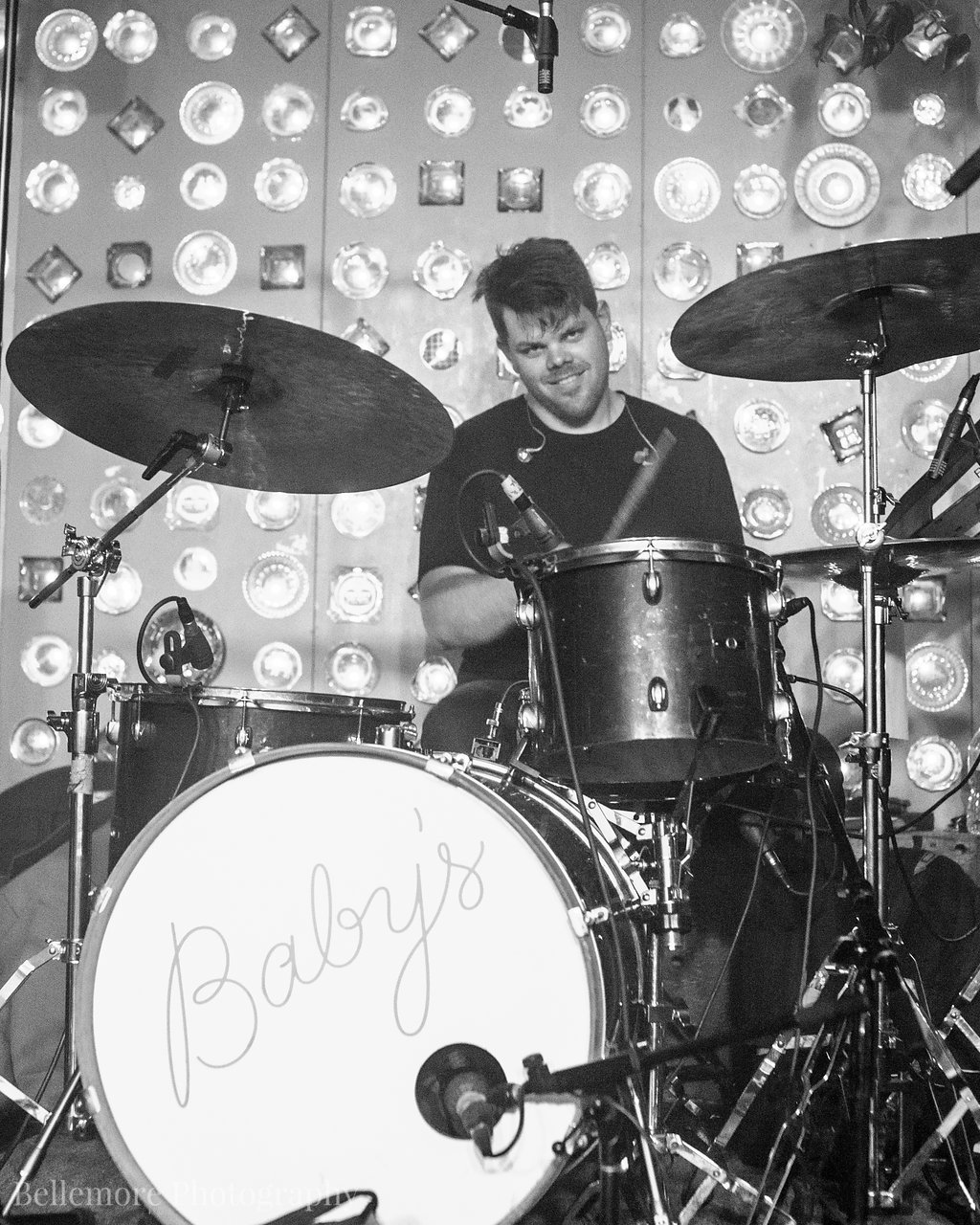 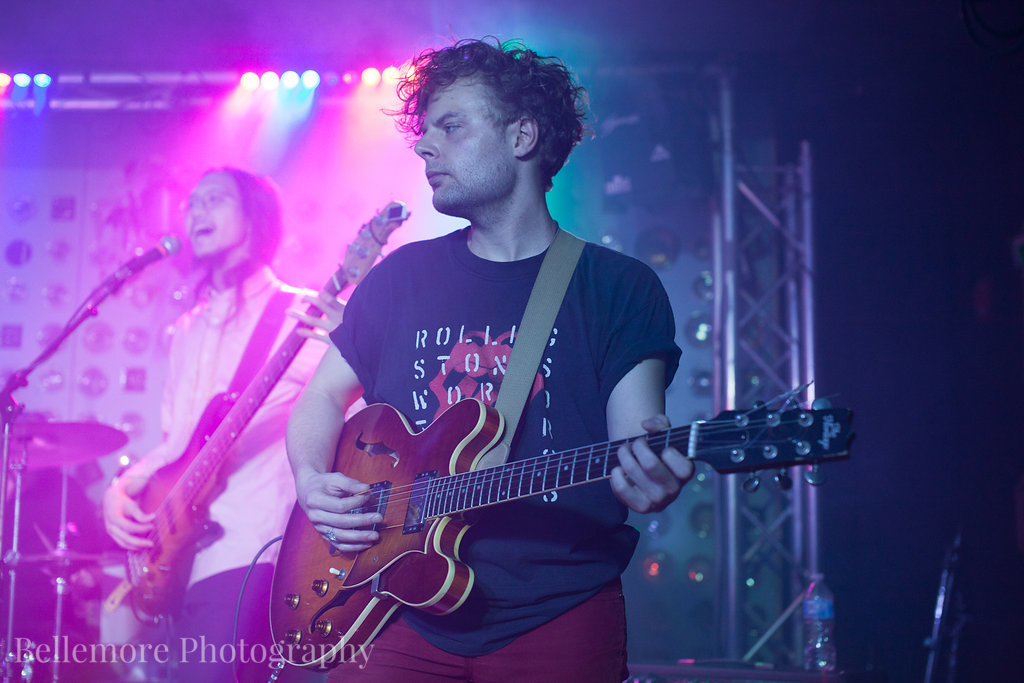 Aaron Liao on bass and Tomek Miernowski on guitar 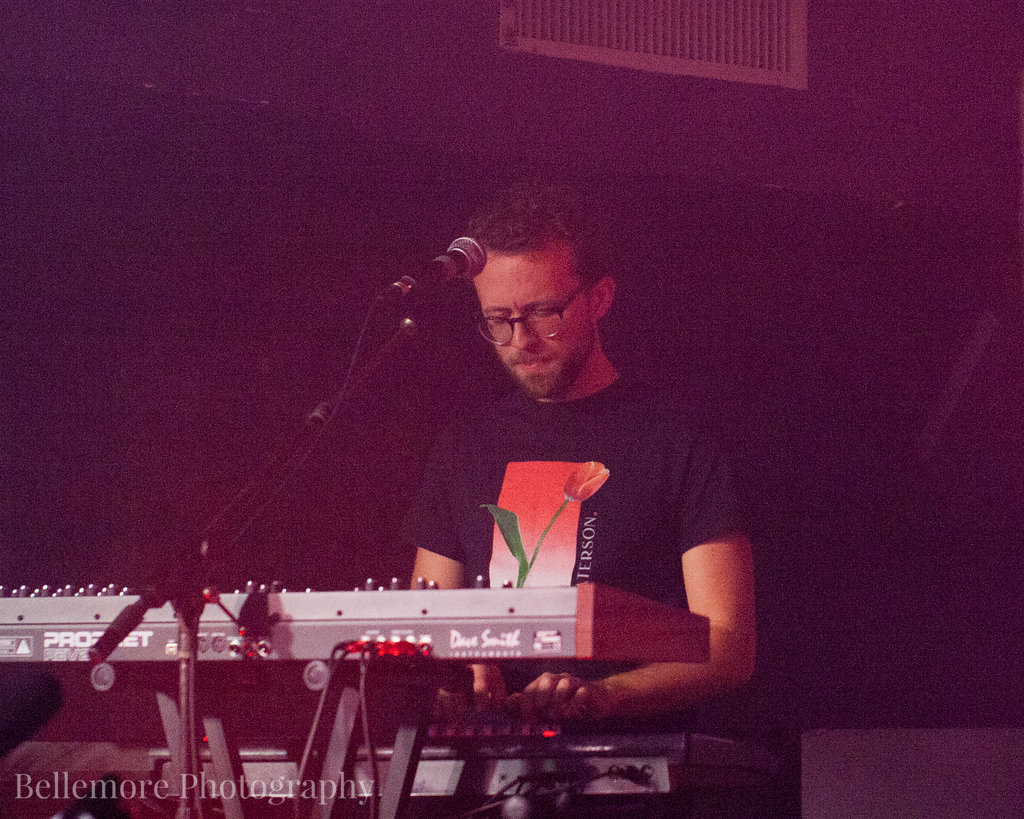 The concert wrapped up with another outfit change for the encore, Caleb playing guitar while down on his knees, and the usual frenetic dancing.

After the show, one of the other photographers came over and talked to me about the show and said something that I thought really summed up a typical Caleb Hawley show. He asked me how I thought my photos came out because, “Man, that guy is constantly moving, it’s hard to get him in focus.” It’s true. No matter what size crowd, Caleb always entertains and on a night like that night in a very crowded Baby’s All Right, he entertained us like I’ve rarely seen before.

So if you didn’t heed my advice earlier and immediately purchase a ticket to a future show, go do it now. Then come back and enjoy the rest of the photos from the show. See you out there! 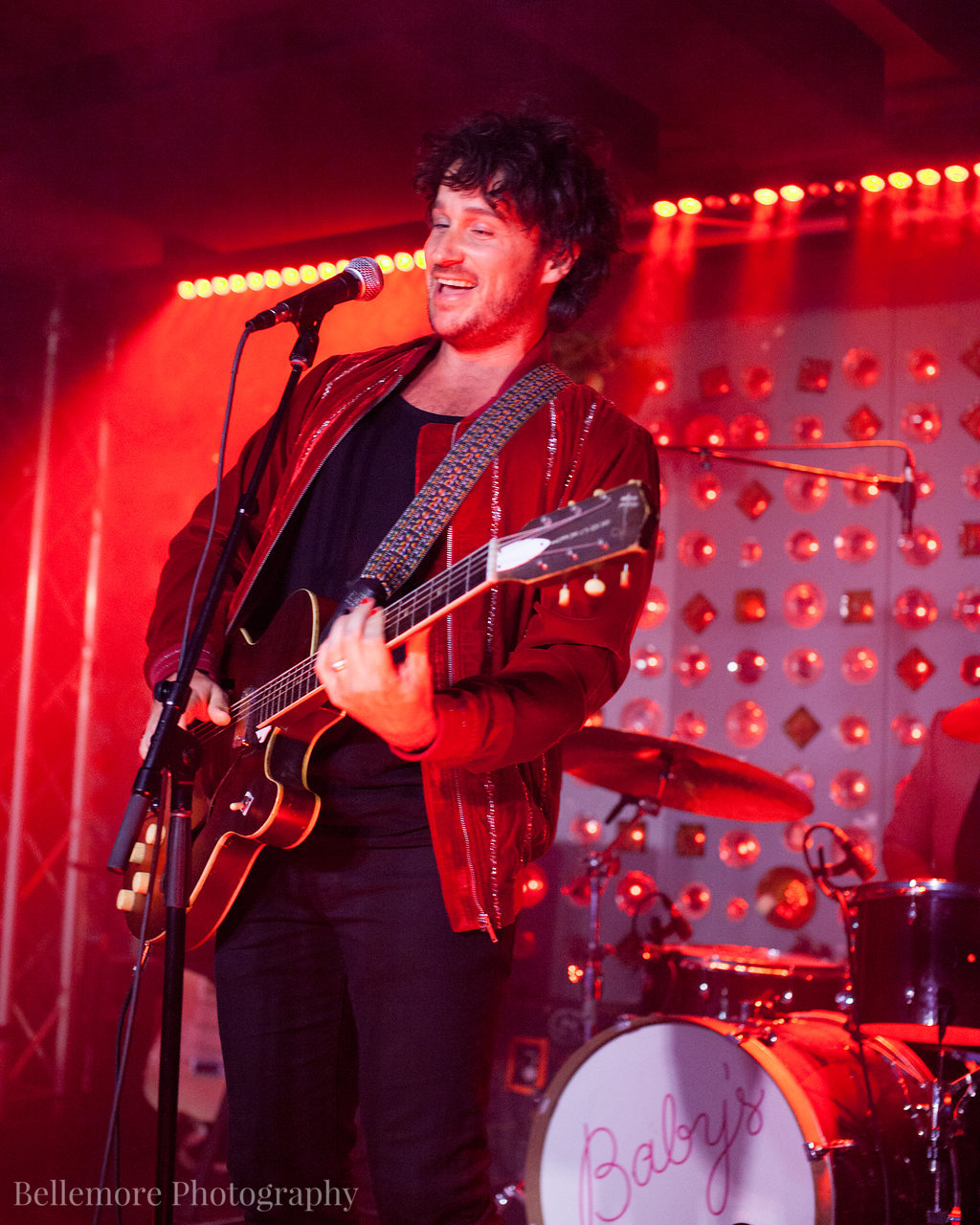 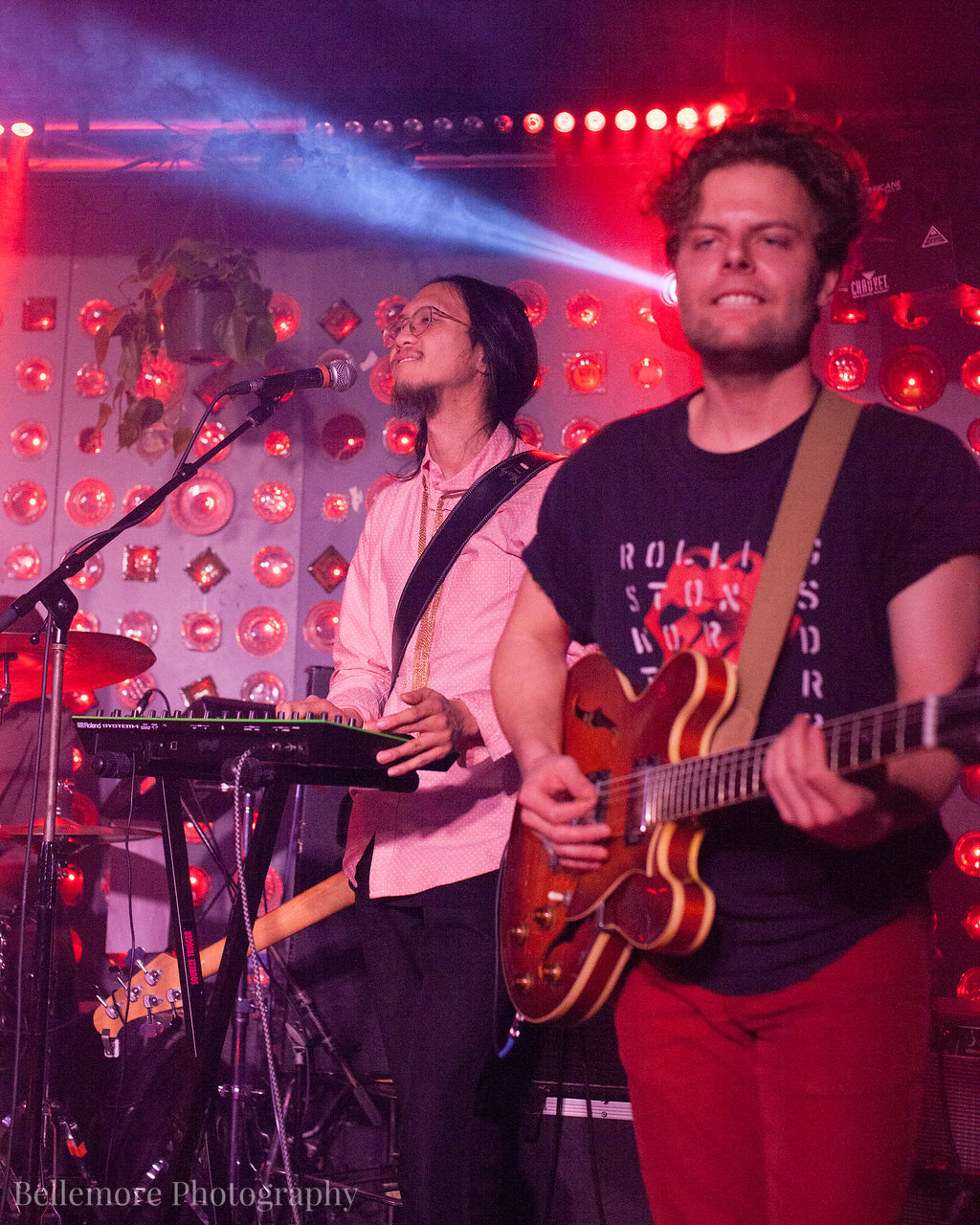 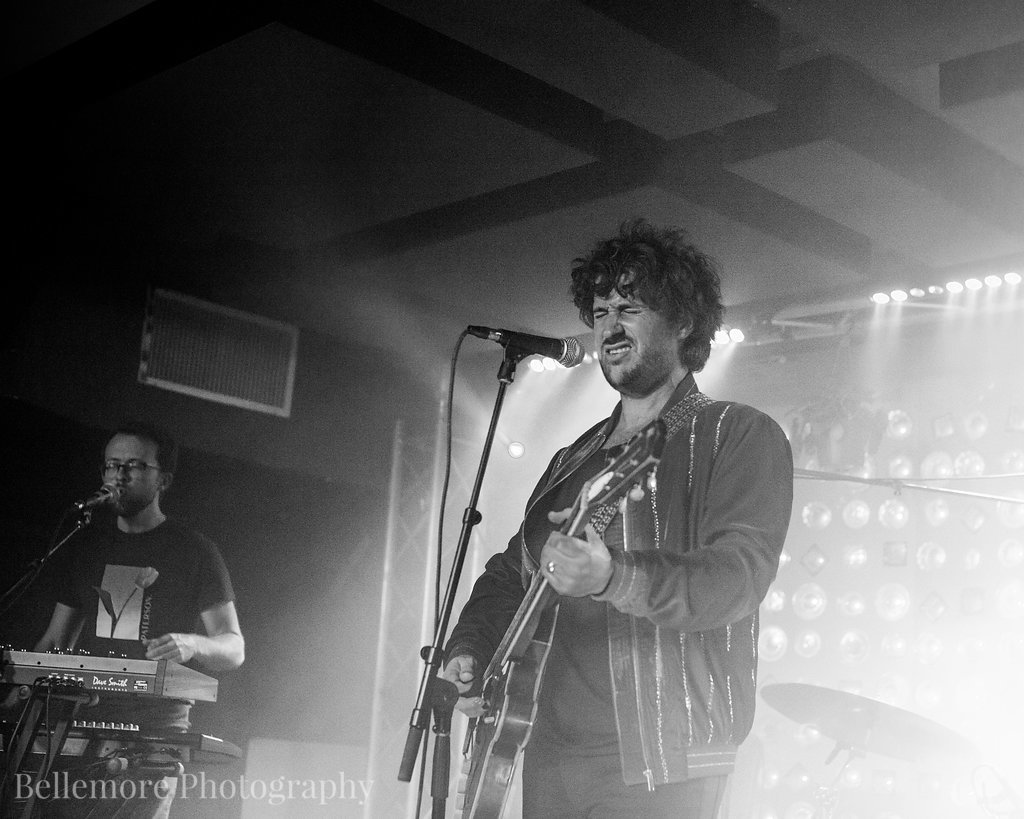 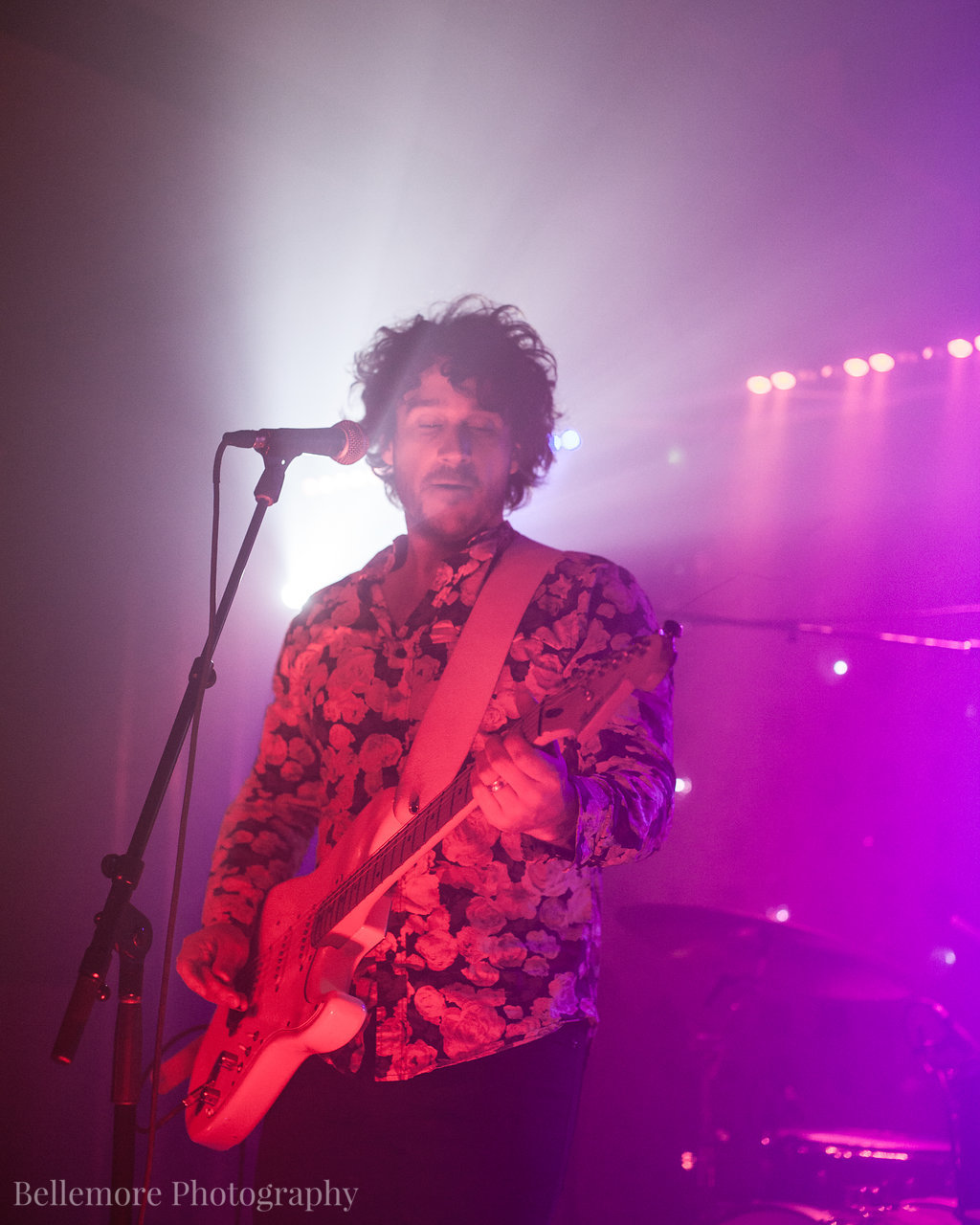 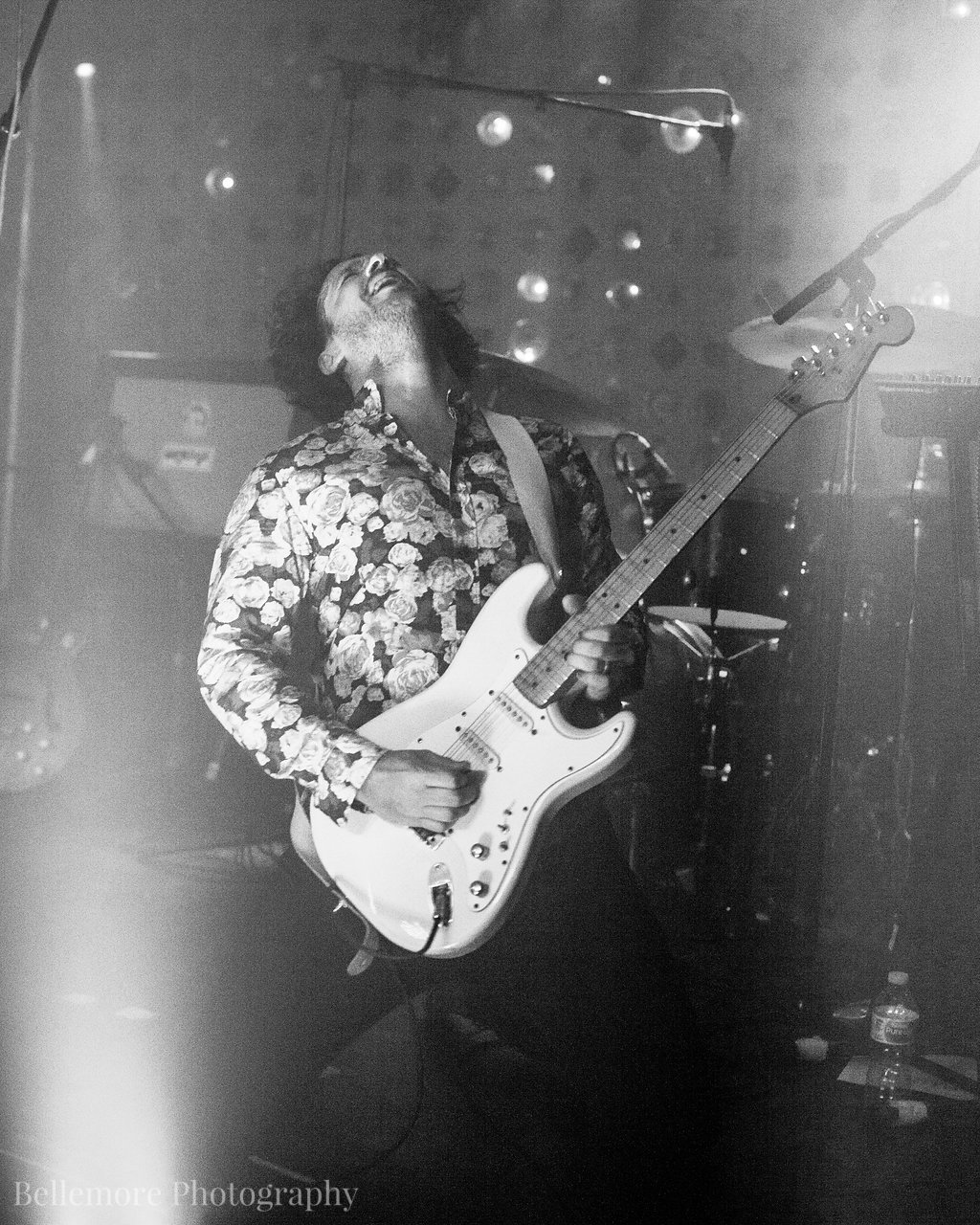 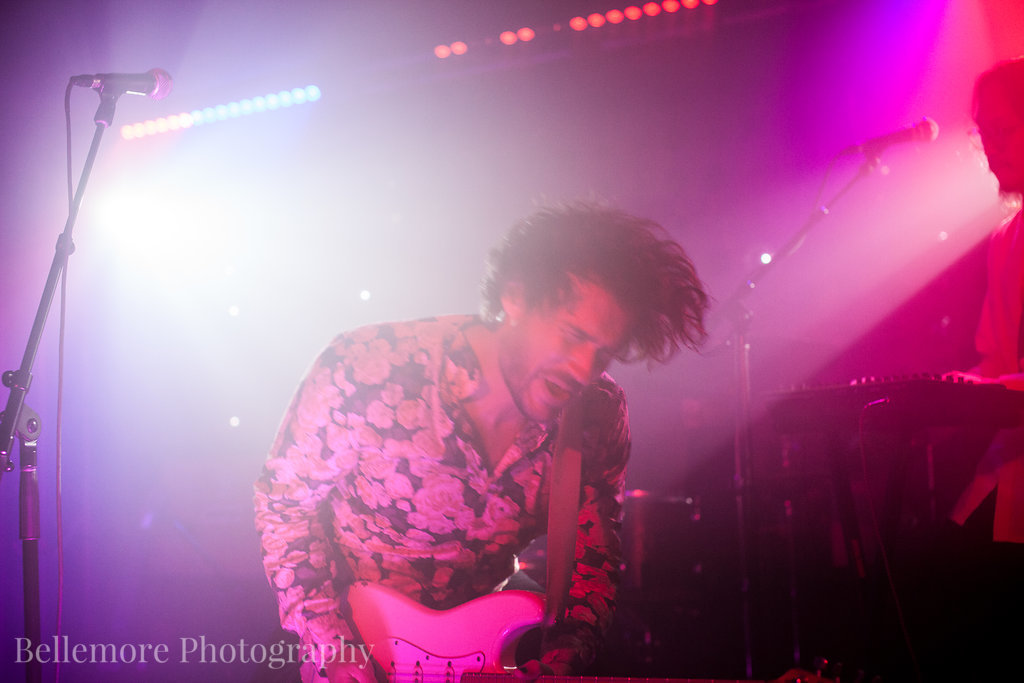 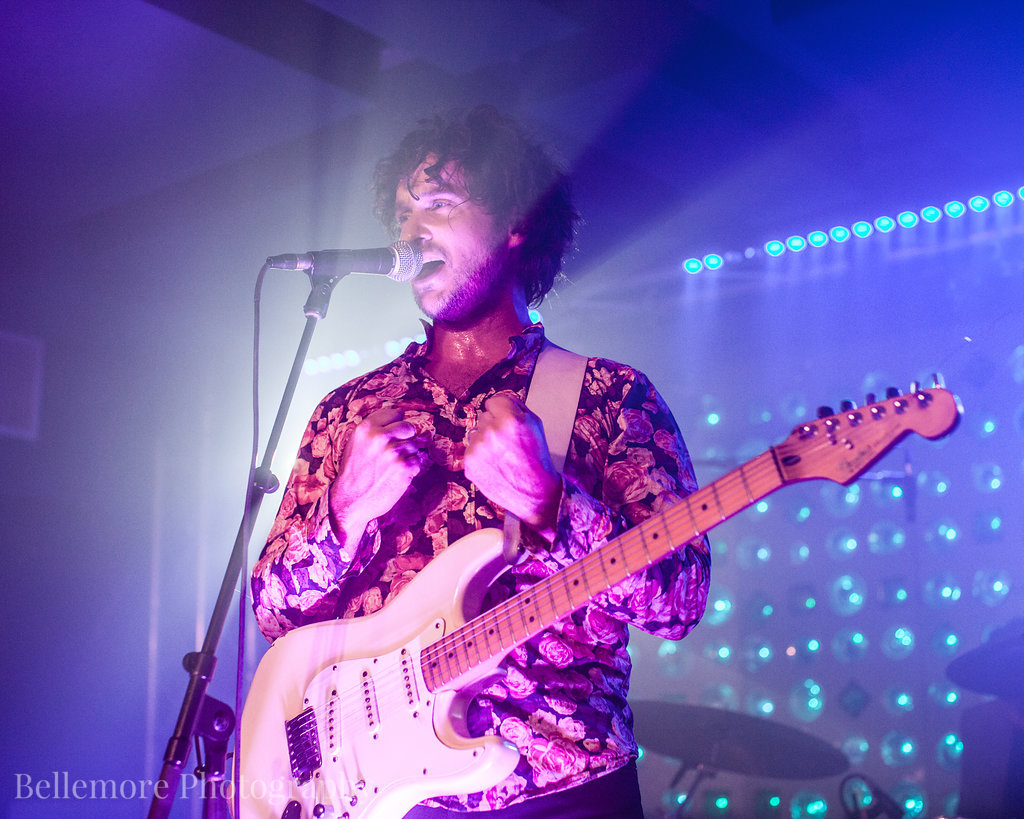 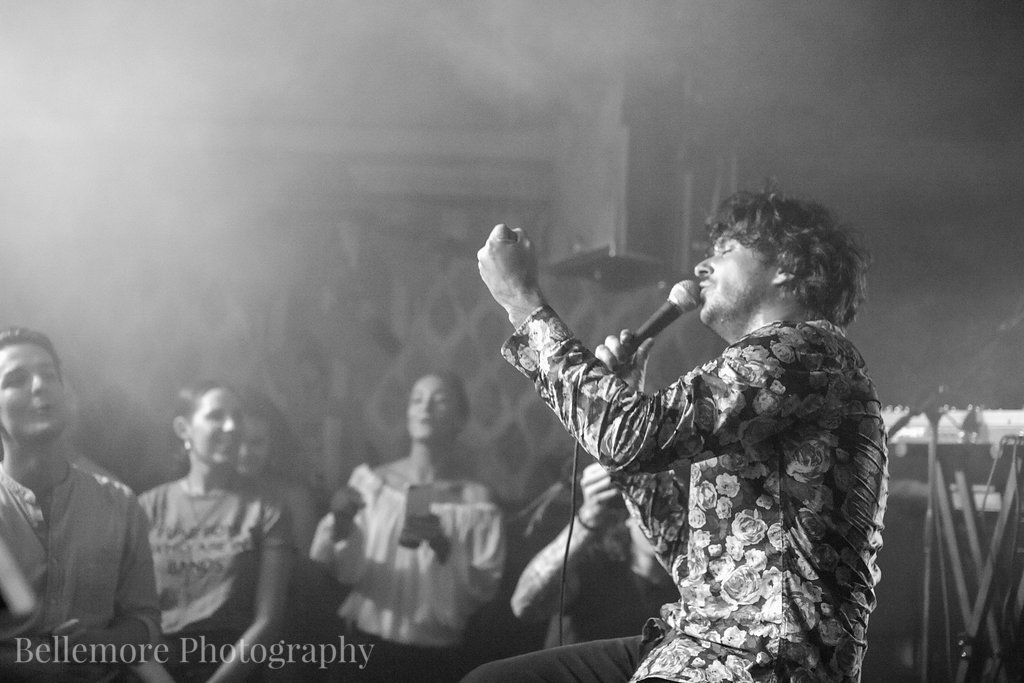 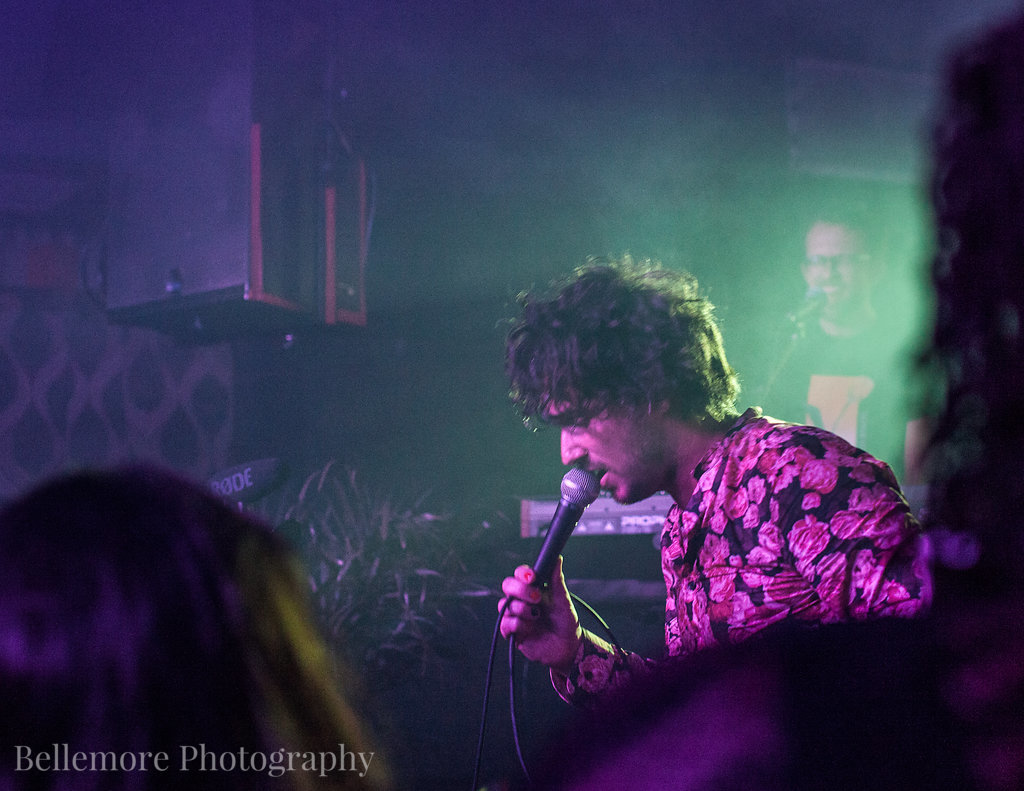 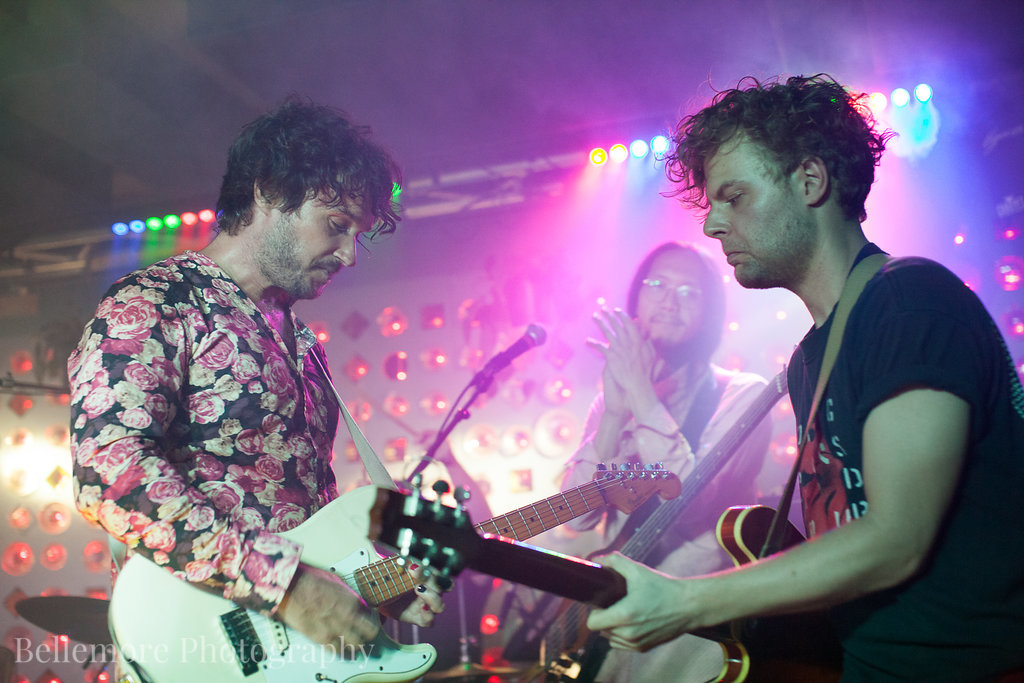 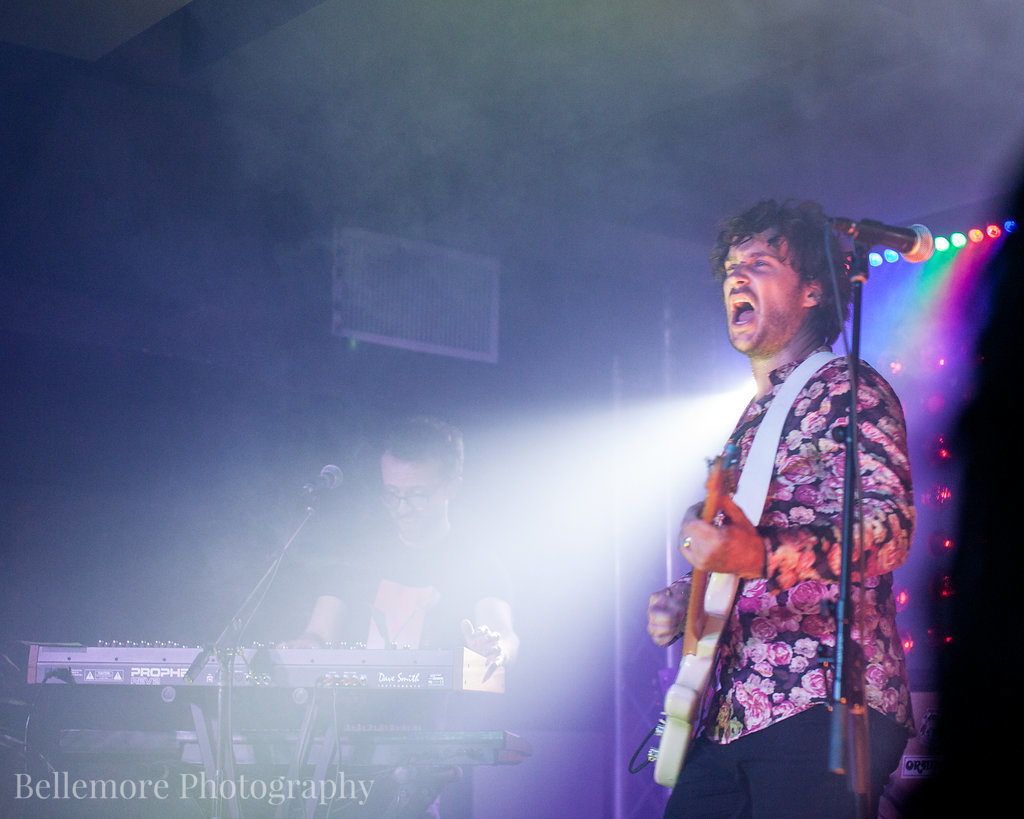 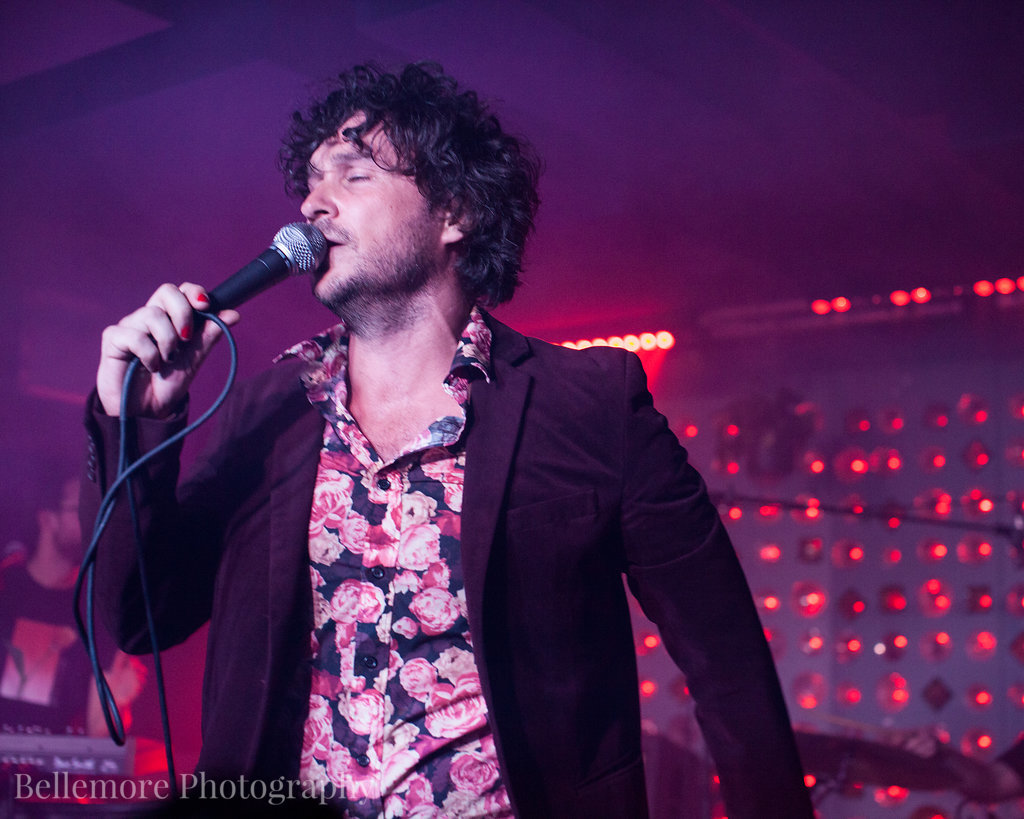