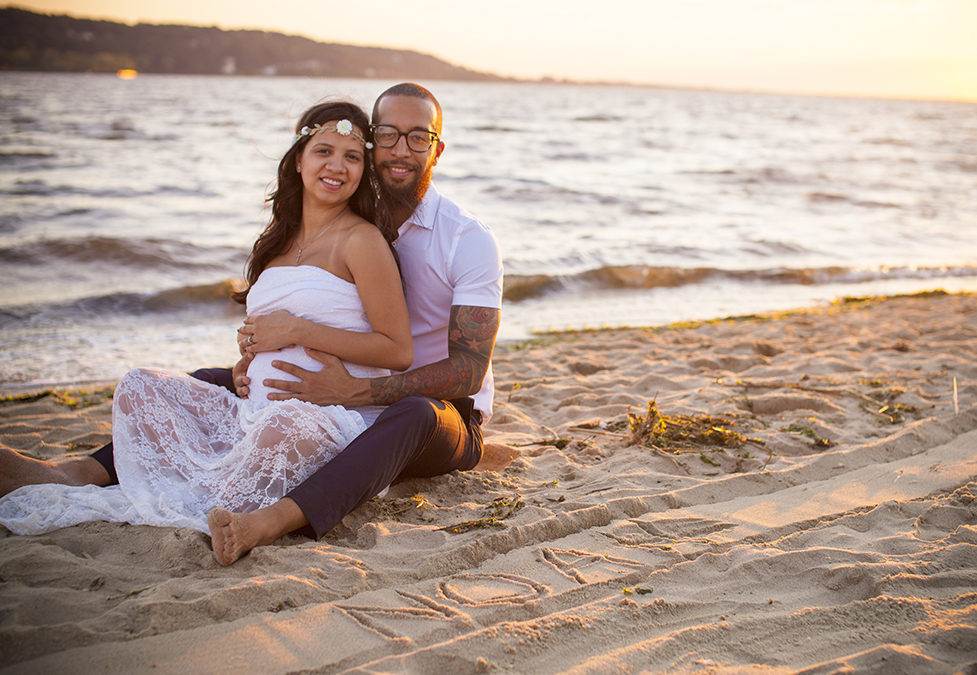 Beach shoots. I love them. There’s nothing like being on the beach and watching the sunset. So naturally, that’s one of my favorite places to do portraits. I had the pleasure of taking Araceli and Charlie’s maternity photos last year at Sandy Hook, in August at sunset. It was quite possibly the most beautiful lighting I’ve ever had on a shoot.

This year, they asked me to take their new family’s portraits on the same beach in August at sunset. The results were amazing, but not only because of the beautiful lighting that we were lucky enough to get again. Something had happened to these two in a year’s time. They had gone from being a couple to being parents and it was so evident in their pictures. It was amazing to me to see the evolution of two people becoming parents.

Because I had done both of their portrait sessions, I have the unique ability to be able to put the pictures side by side to show the story.

First, one of my favorite poses of Araceli, staring down at her tummy in wonder at what the person that she was carrying inside her would be like. The same pose a year later, with her adorable son, Noah. The bright look in her eyes and the pride shows through as she holds her son and watches him curl his toes in the sand. The first picture is of Araceli and Charlie sitting on the beach with their son’s name drawn in the sand. They are together, holding onto each other, smiling. The second picture is of their new family, sitting on the beach, with Noah’s name drawn in the sand. Araceli and Charlie are sitting  next to each other, with Noah in the middle. He is now the center of their world. In this last set, Araceli and Charlie are standing together, kissing in the sunset. In the second photo, they are doing the same thing, except Noah looks very impatient and upset that they aren’t paying attention to him. (In the subsequent photo, he is actually pulling his mom’s face away from Dad!)