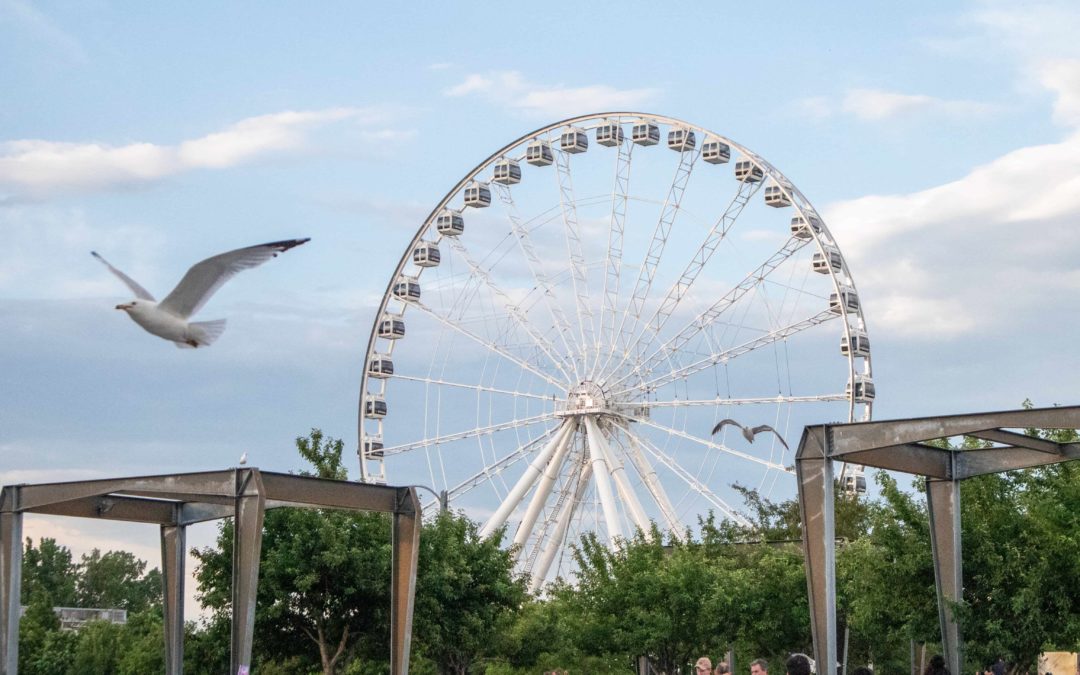 Our family doesn’t like to be “tourists” we prefer to be educated travelers. We tend not to go to chains, unless they are chains we don’t have. (I’m looking at you Tim Horton’s) We want to experience places as if we were locals. Obviously, there are certain tourist attractions you have to see in each place, for example, you wouldn’t go to Philadelphia and not see the Liberty Bell. For the most part though, we want to find the weird, strange and out of the way. I did a lot of research ahead of time on this trip to find these places.

When we got to Montreal, after a very long day of traveling out of the mountains from Innue-Essipit, we were tired. It was 65 degrees when we left the mountains and it was 92 and humid when we got to Montreal. We hadn’t eaten since there wasn’t really a place to stop and eat on the way. To say we were HANGRY was an understatement. It was around 5pm by the time we got checked in our hotel and headed out to find “lunch”.

We headed out to Crepe Suzette to get some crepes. When we got there we discovered that they had fondue as well and since we were so hungry, we all got that. We started with cheese and had steak and chicken for our main course. After they finished one plate of meat, the waiter came out and offered them another plate of meat! It came with the entree free of charge. The dessert course was chocolate, fruit and crepes. It was an amazing dinner and exactly what us weary travelers needed to pep us up. 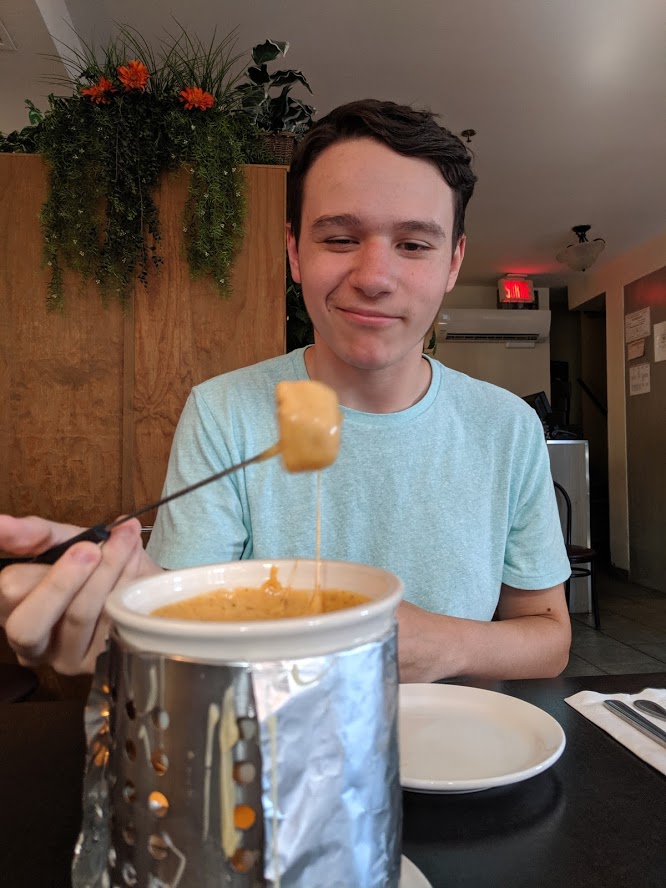 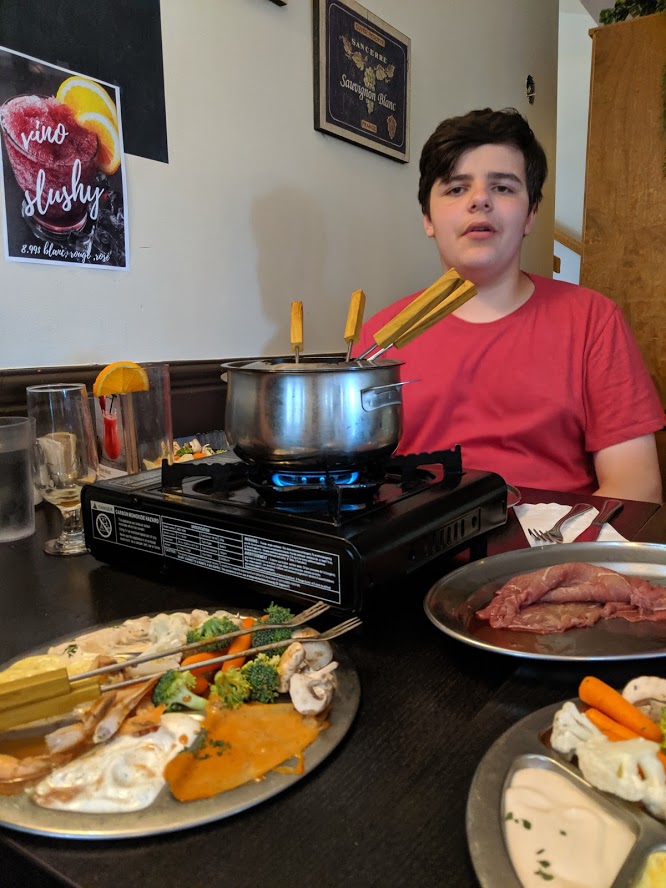 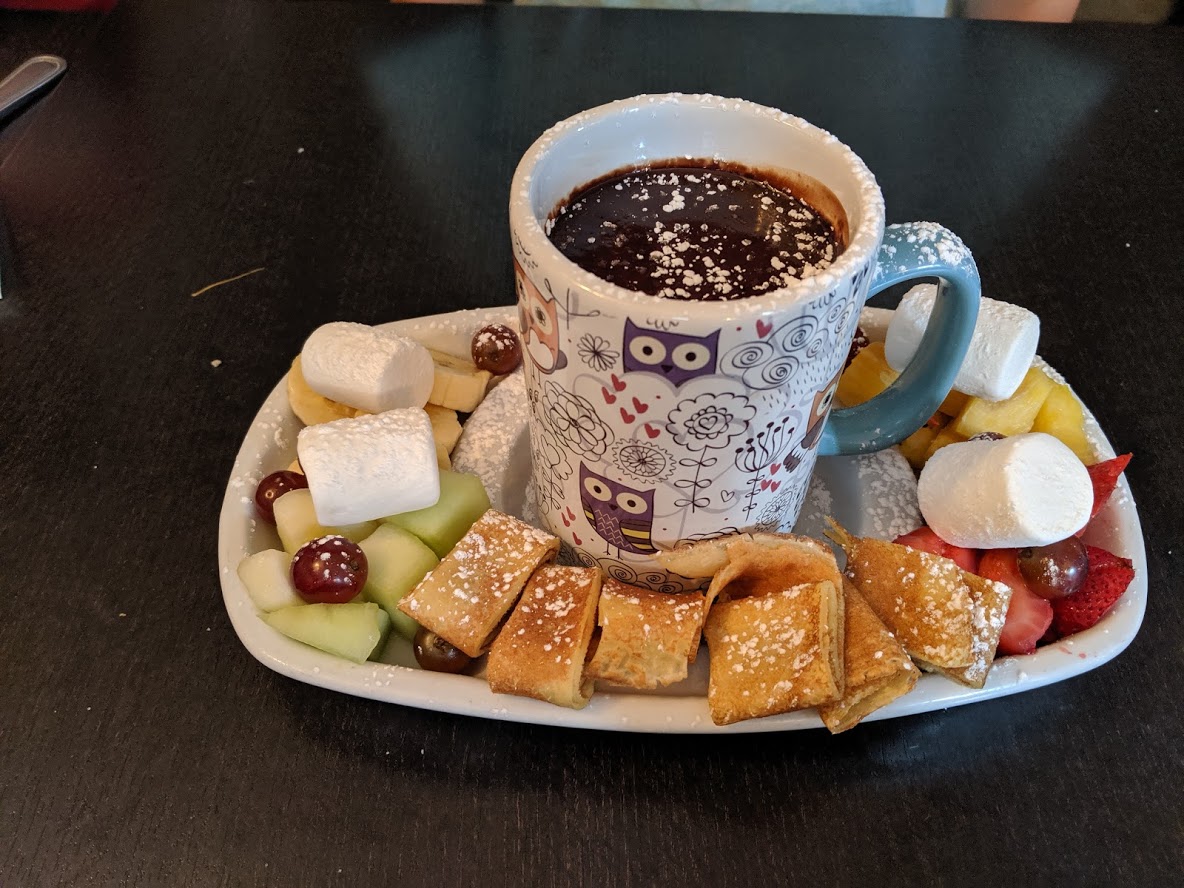 After dinner, we walked down to the Old Port area. It reminded me of the boardwalk but instead of boards and the ocean it was cement and next to the river. It was lined with food trucks of all sorts, there were paddle boats and surreys to rent and the crown jewel was the big ferris wheel in the middle. They also had stands with vendors selling arts and craft items and t-shirts. Over the top was a zipline and a high ropes course. Everything was overpriced but the atmosphere was fun. At the end of it was the Jacques Cartier bridge. At 10pm during the summer, it comes alive with a light show that is programmed to be interactive with the weather, traffic and the mood of the city according to all the tweets that day. We had a thunderstorm bearing down on us but my family patiently waited with me to see the show. (We got them ice cream) I enjoyed the light show, the rest of my family thought is was okay. 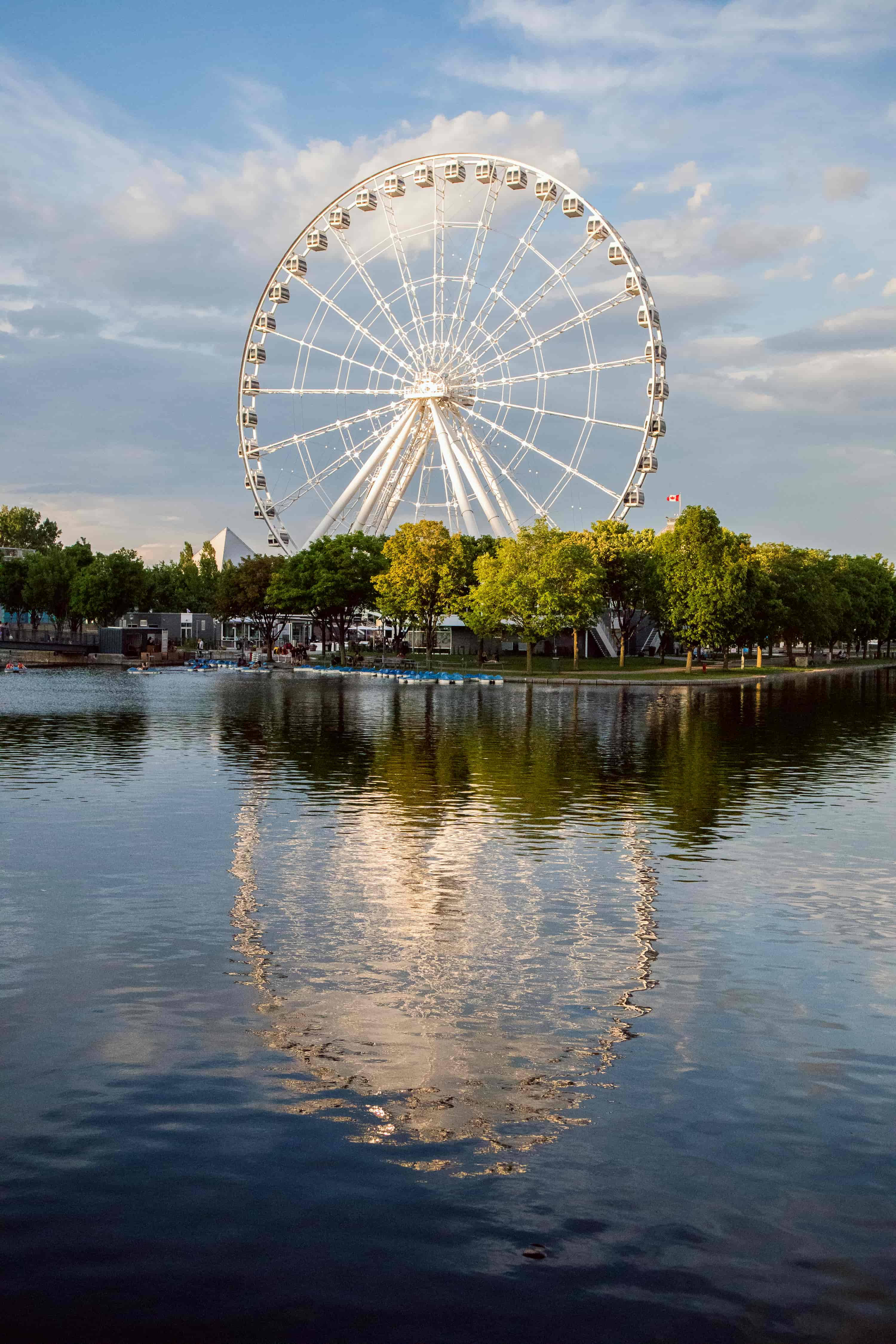 The next day, we visited the Canadian Six Flags- La Ronde. Season passes there were way cheaper because the park is smaller and the exchange rate made it less than a one day ticket. So we went with the intention of validating our passes and just briefly checking out the park. It was so stinking hot! We were only there for a short while and rode a few coasters before we headed out to find lunch. Now the passes work at our Six Flags for the rest of the season and we paid about $40 each for them. Win!

For lunch, we went to Cafe le Chat Hereaux or the Cat Cafe. They didn’t have an extensive menu, mostly grilled cheese, but the company was fantastic. Cats were lounging out all over sleeping or exploring the large network of cat walks over head. One curious cat came over to me with an olive he found and wanted to play. When I went in the restroom, there was a fella hanging out in the stall. Their litter box is in there, so I guess they come and go as people use the restroom. You can’t cuddle them, as you’d think, but you can pet them as they walk by you. It was our first time at anything like that, so it was pretty neat to experience.

After being in the sun all day, we were pretty beat, so we drove up to the top of Mount Royal, which is a giant park in the middle of the city. There are some great views of Montreal from up there but we didn’t venture far from the air conditioned car. After a short drive, we went back to the hotel for a quick nap before dinner.

Our hotel was right next to a cool downtown area with lots of patios and restaurants, so we found a place there to eat that had open sides. It had cooled off so much from earlier in the day and it was a grogeous night to walk around. We ate at Les 3 Brasseurs and then walked down to see the Gay Village. 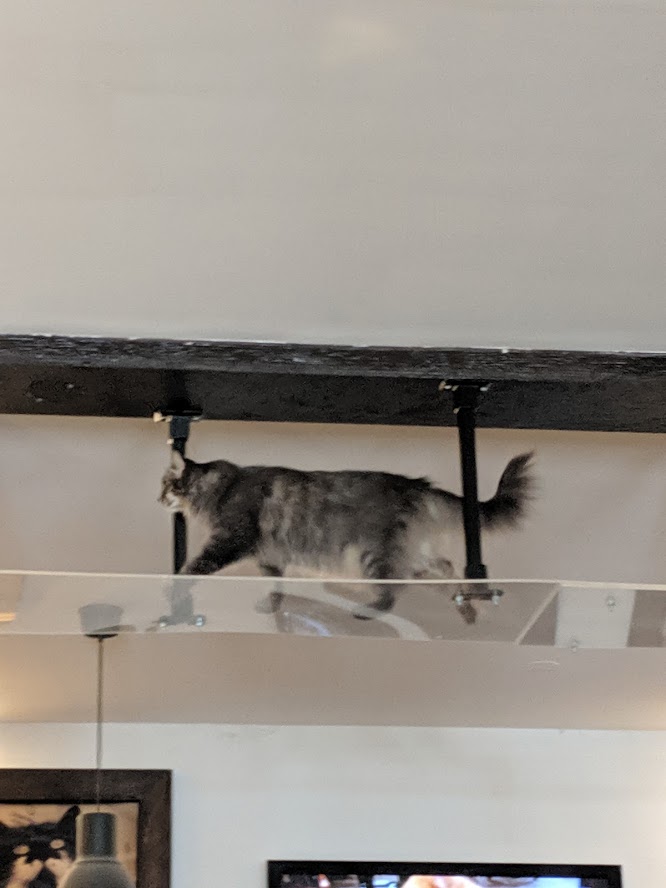 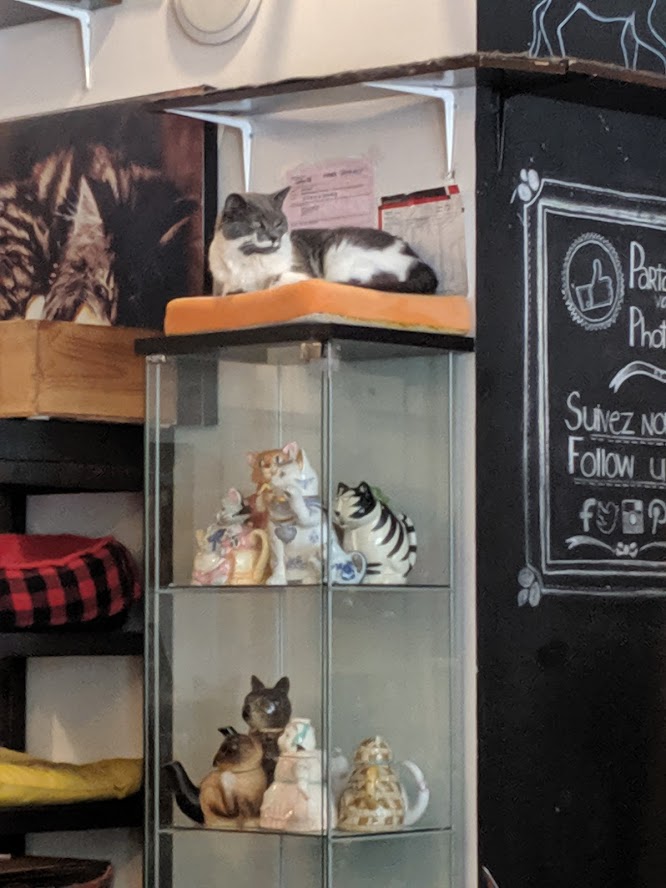 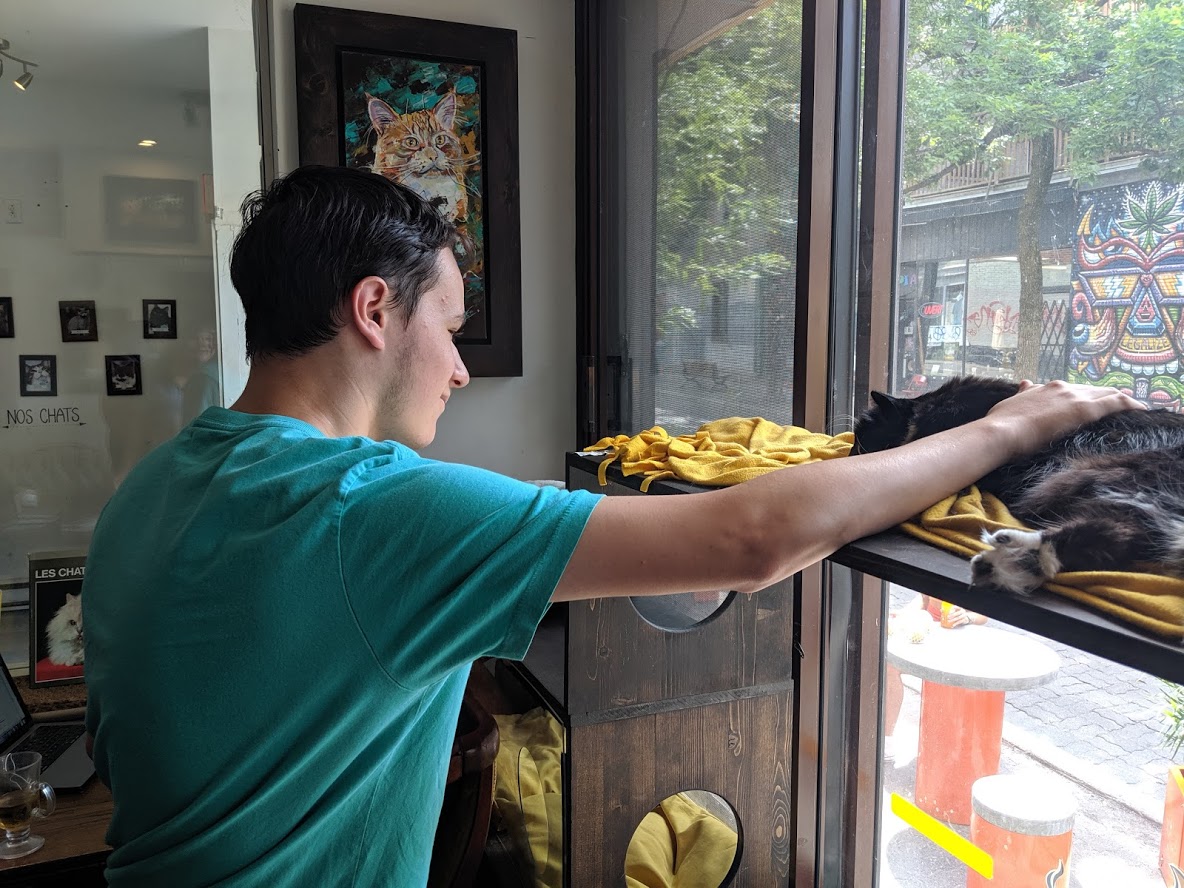 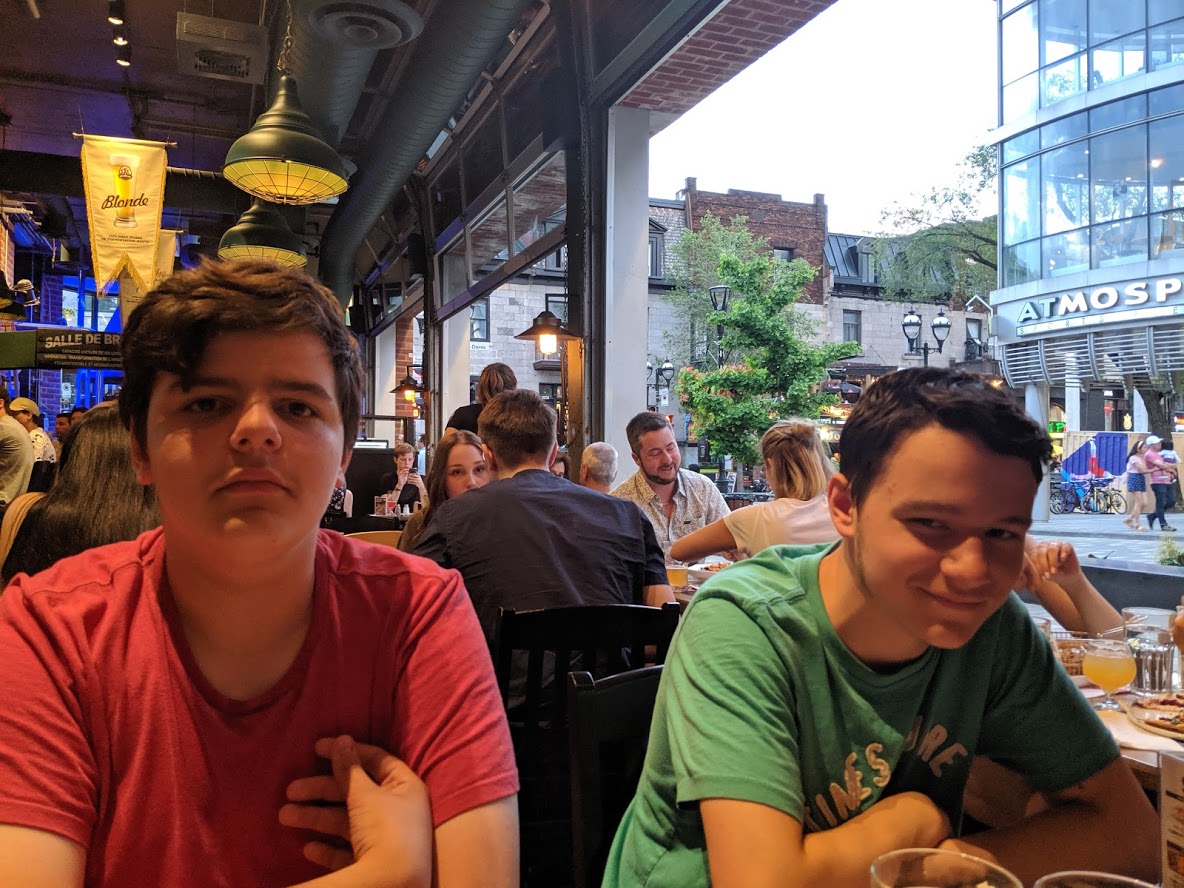 On our walk across the city, we came across this park where they had a huge stage erected and were having some sort of dress rehearsal. There was an acrobat on a wire above dancers acting out a Spartan fight. We found out later that it was the Montreal Circus preparing for a Canada Day performance. 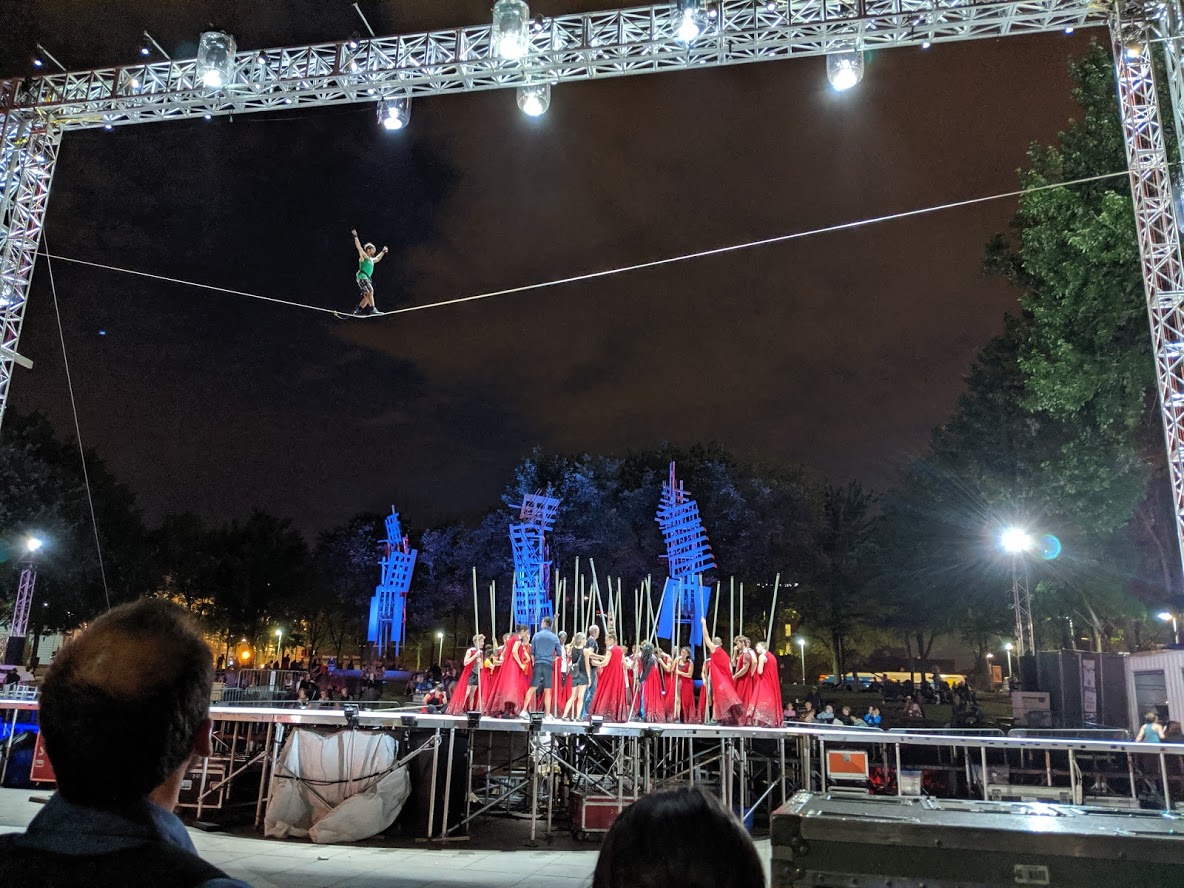 Casey found a place online that he wanted to try called La Diperie. It’s an ice cream shop with about 30 different flavors of dipped toppings. It was in the Gay Village, so we decided to walk through it and check it out. It was so nice! They have colored garlands hanging the whole 1-2 mile stretch of road. It’s all shut down so only foot traffic is allowed. During the day, they had stalls and vendors, but they were closed at night. There were several bars and clubs hopping.

Over the central part of the street was a pedestrian bridge that you could walk up and it put you above all the garland for a better view.

We found La Diperie and got some amazing ice cream. I had salted caramel, Dillon had cookie dough, Casey had mint and I think Scott had some sort of chocolate peanut butter. I highly recommend checking it out. 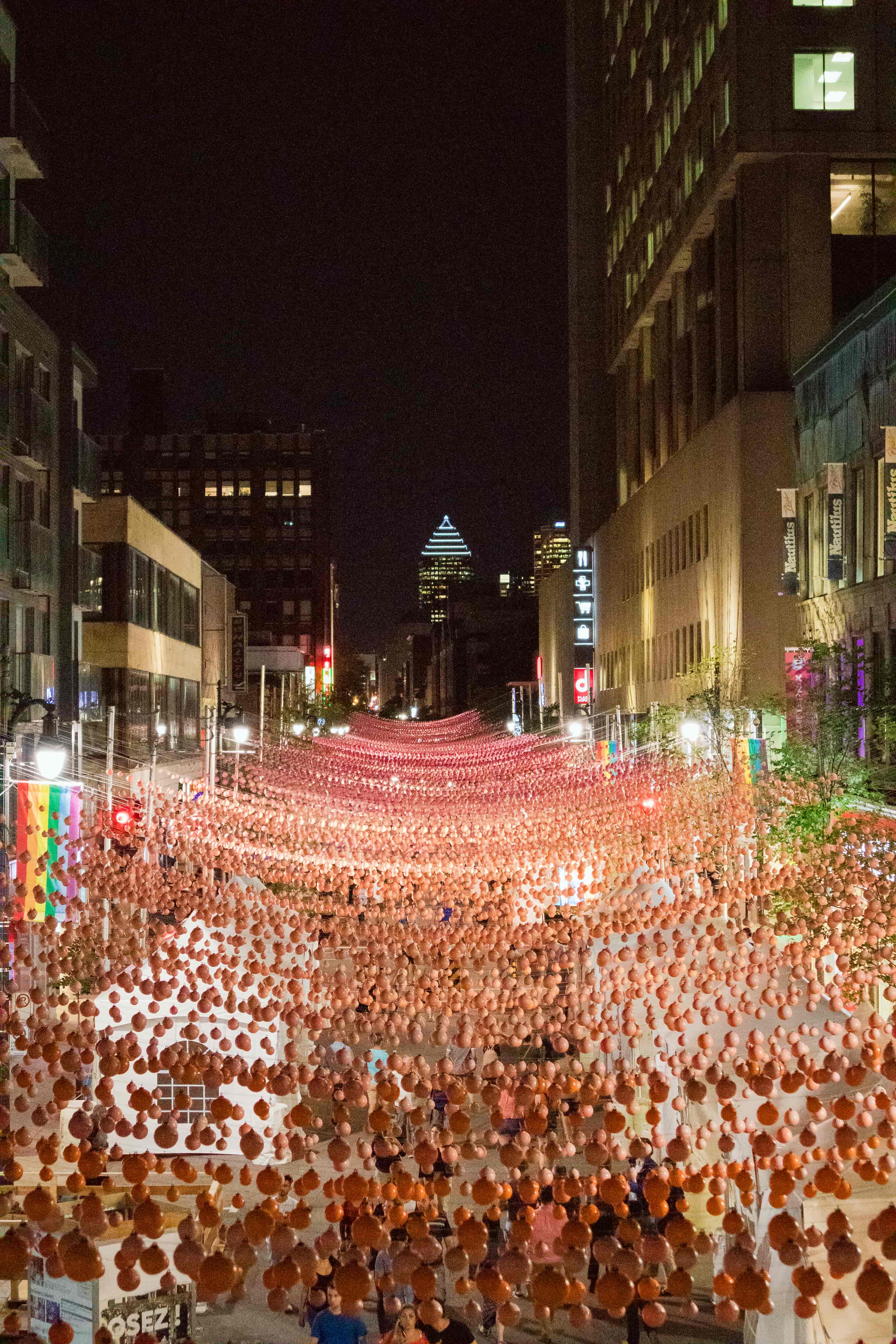 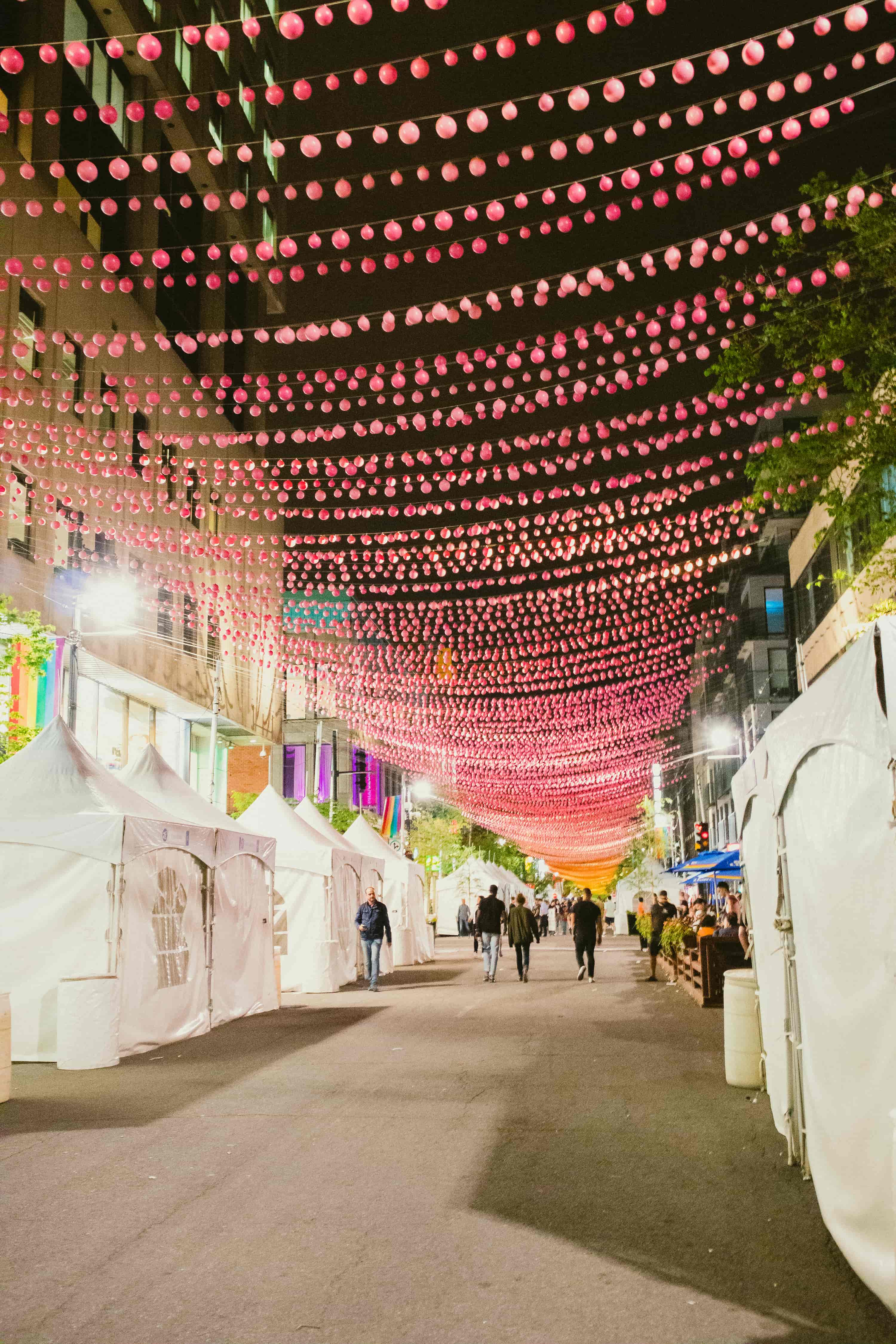