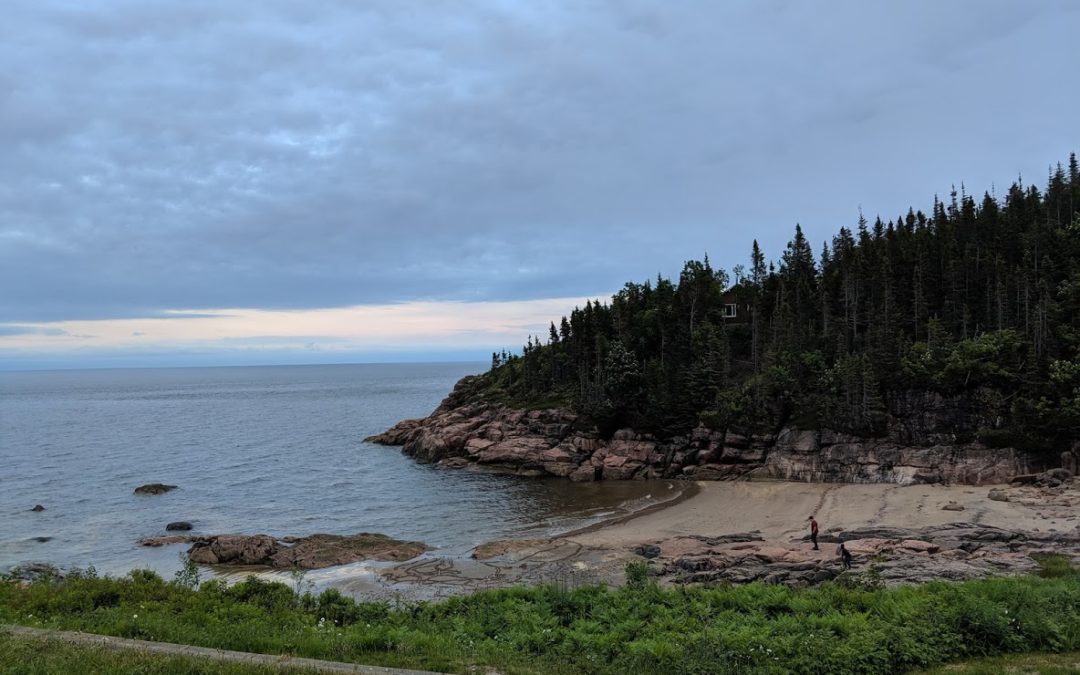 One of the coolest places we visited and the place that looked most like what I pictured Canada to look like was a town about 3 1/2 hours northeast of Quebec City that was only reachable by ferry. On a map it’s called Innue-Essipit or just Essipit. It’s a First People’s town and there isn’t much there except a company that does whale tours, outfitting, camping and lodging.

Casey’s one request was that he wanted to see Candian widlife. He said polar bears and puffins and I told him we weren’t going far enough north for that so we compromised with whales and maybe seals.

The company runs 12 and 36 passenger zodiac raft tours to go whale watching in the section of the Saint Lawrence river that houses all different types of whales. They explained to use that the brackish water from the mouth of the Saint Lawrence is a prime source of phytoplankton that attracts bigger plankton, that attracts krill, which is what the whales eat. We were on the lookout for blue whales, which are the largest of the whale species found there but ended up seeing fin whales instead.

The thing about leaving a major city in a French speaking province is that you run into a lot more people that only speak French. As in everyone only spoke French. The tour said it was bilingual but the tour guide knew only enough English to give us some safety tips and explain the basics of whales. I spent most of the tour straining to hear what she was saying in French over the sound of the boat engine and then attempting to give the gist of it to Casey, who was frustrated that he didn’t understand a word she was saying. Did I mention it’s a good idea to do some DuoLingo before heading to Quebec? If not, I’ll mention it again.

I have no pictures from the whaling tour as I was afraid to take my camera or phone on the tiny zodiac. It would have been fine, but I wasn’t taking any chances. So the memory only lives on in our minds. Sorry! 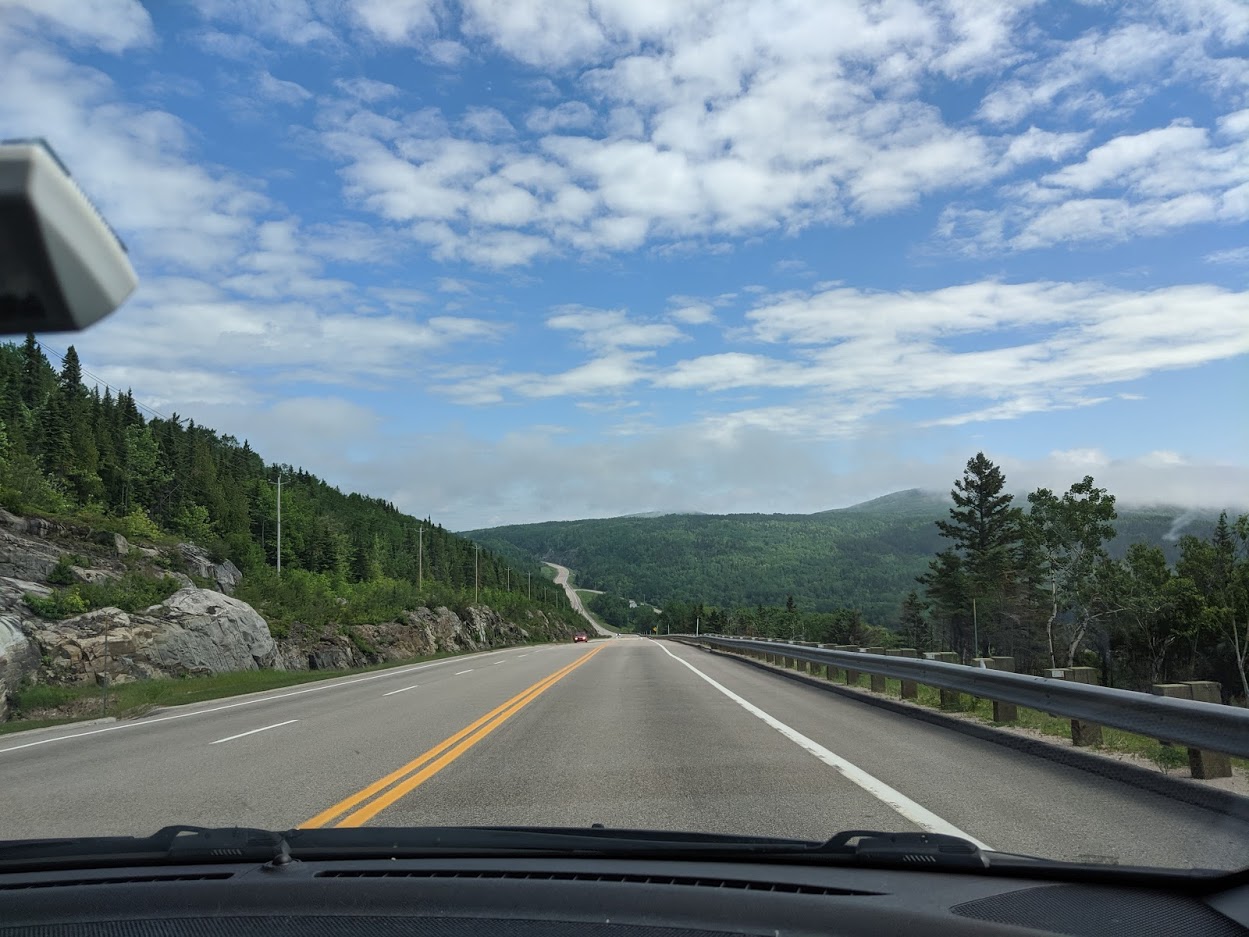 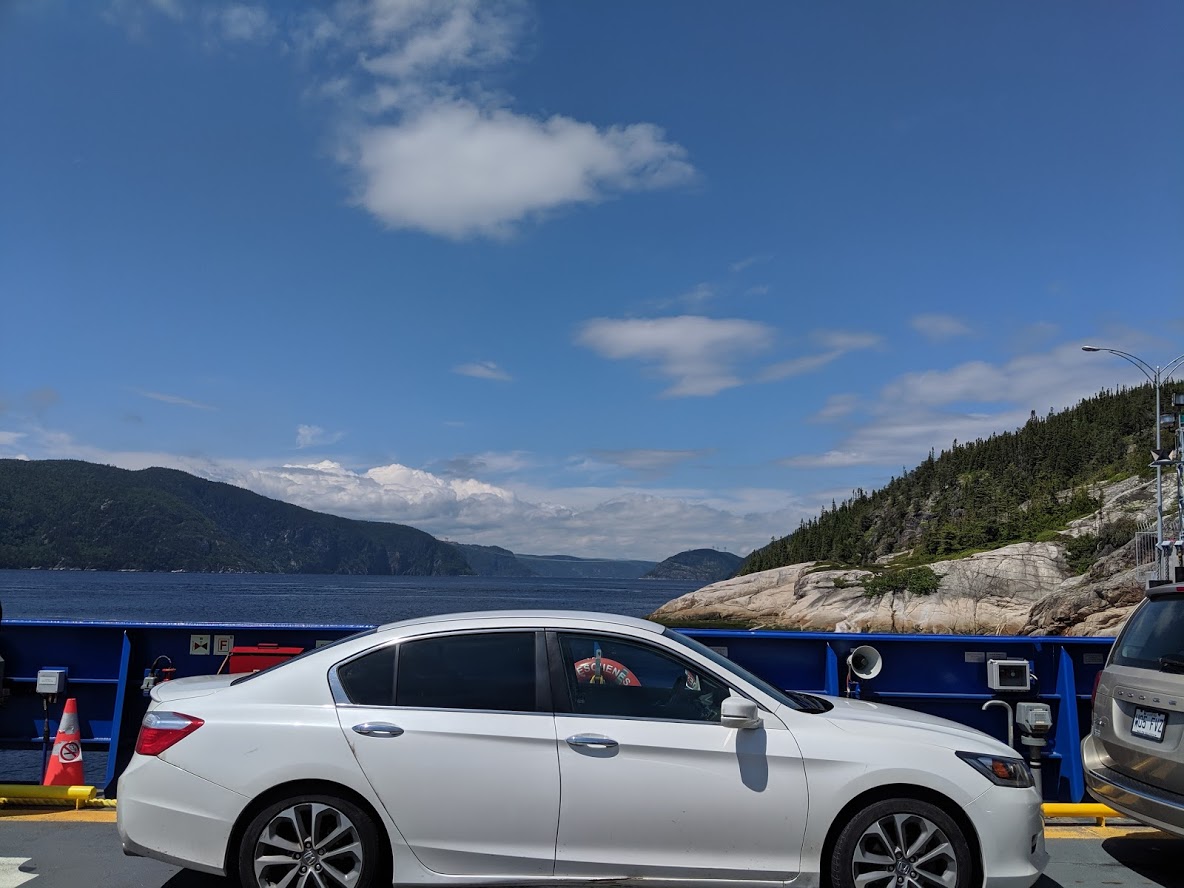 Scott and I like to be adventerous when we travel and we wanted to eat things that were local to the area. Meanwhile, the kids were upset that they didn’t have buffalo wings. HAHA. When we stopped at a little “diner” right on the other side of the ferry, we ordered lunch. Scott got seafood poutine and I ordered the “hot chicken sandwich”. I wasn’t sure what it was going to be as it translated from French. It was either going to be a spicy chicken sandwich, which is what I was hoping for, or it was going to be something else. It was something else. Remember school lunch when we had the hot turkey sandwich and it was turkey between two pieces of white bread with gravy poured on top? Well that’s what this was except it was chicken and it had peas on top. (See picture below) 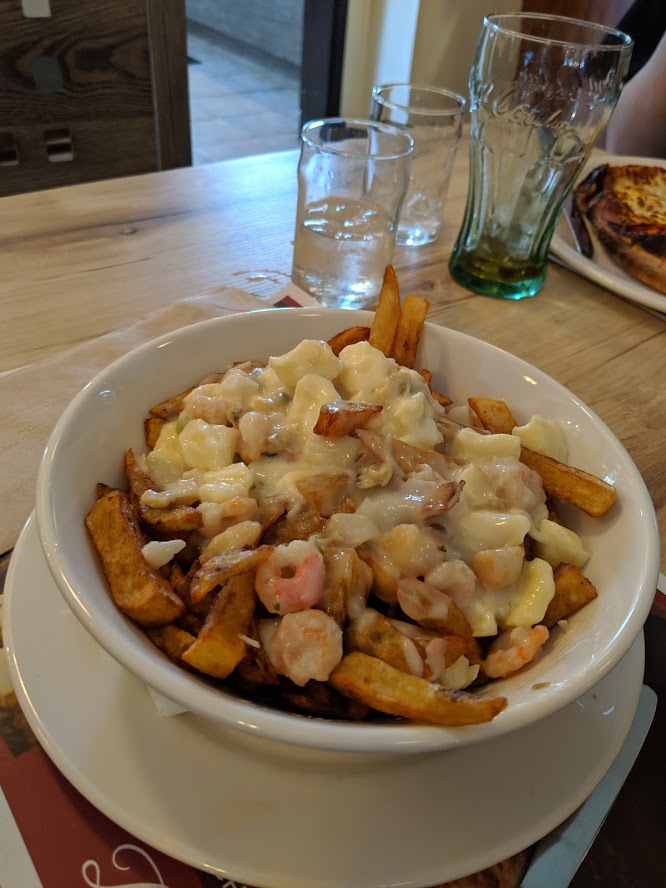 For dinner, we found one of the only restaurants in Essipit. It was right on the waterfront and it looked pretty nice. They spoke zero English so between Google Translate and our limited French, we ordered dinner. Scott got a lobster club sandwich and I got a sandwich that was unique to that region of Quebec. What it ended up being was basically a chicken roll. It was shredded chicken, with a lot of lettuce on a top sliced hot dog bun with tomato halves. It was actually good but everything up there reminded me of food we had here in the US about 30 years ago.

Dillon ended up with two dinners because he failed at ordering in French. LOL It was pretty funny. She brought the first one out as an appetizer and the second one out as an entree.

I tried to fill up on gas on the way home and I did not know the right words in French so I went in, spoke into my phone and then it translated it in French to the people in the store. They were so excited that there was somethign that could do that! The weirdest part of the whole thing was that they all apologized to us for not knowing English! Which is ridiculous seeing as how we were in their country and spoke limited French. 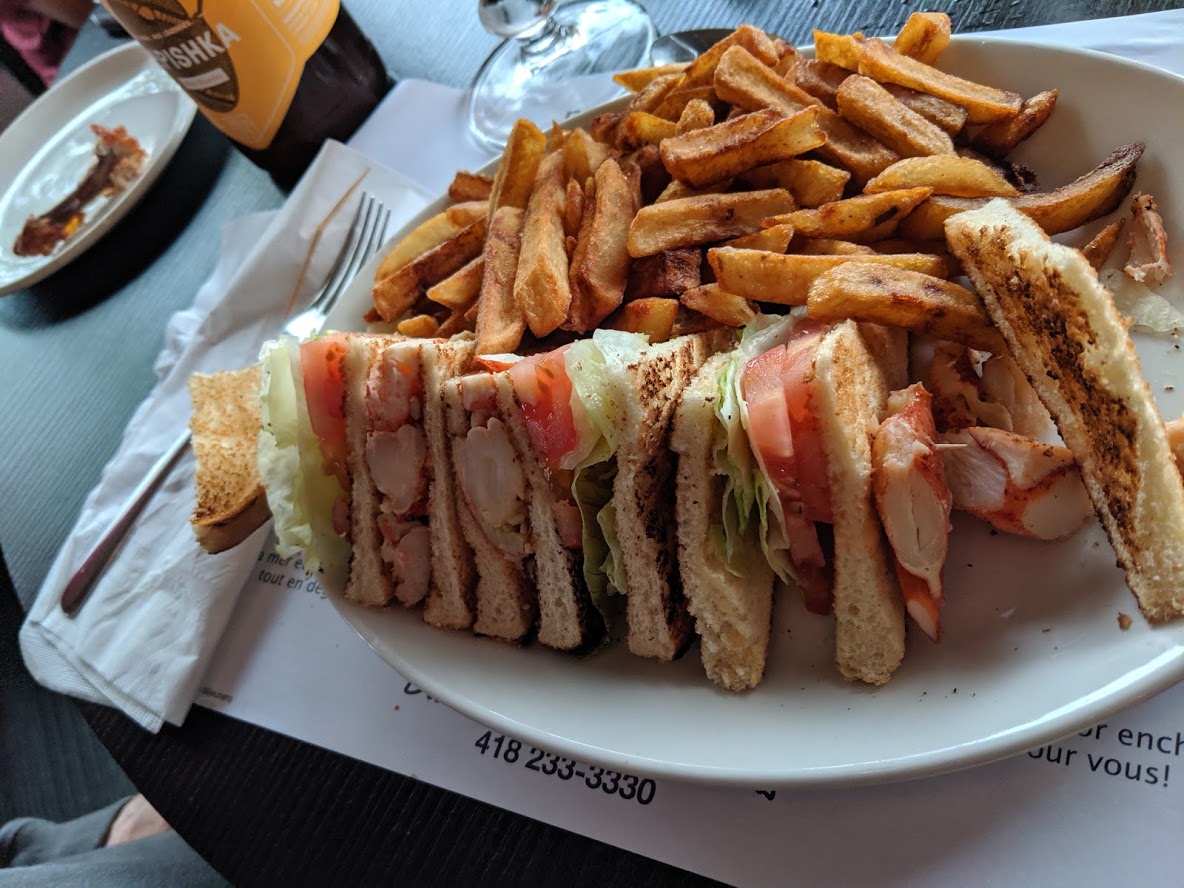 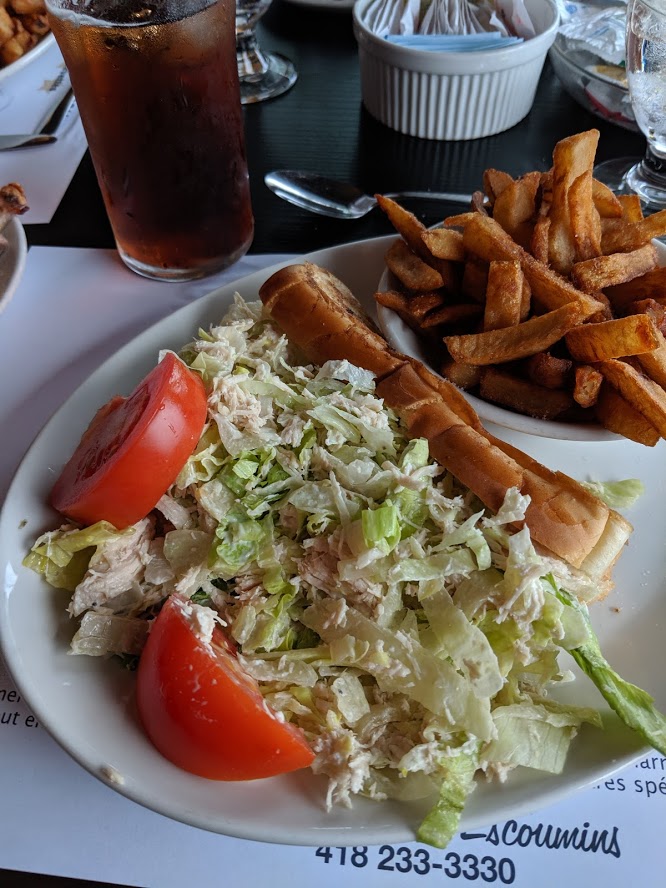 When I got out of the car up in the mountains, I got hit with the smell of pine. The mountain air was so clean and there are so many evergreens up there that it smells like Christmas all the time. It was the strangest experience. The mountains are gorgeous and we drove so high up that we went through what we thought was a giant patch of fog, until we got further up and realized that we were above the clouds!!

I was looking for a moose the whole trip. There are signs everywhere warning you of moose and I didn’t see any! I was really disappointed. The locals told me we had to go out at night and I’d see them. I was afraid of meeting one in the middle of the road! 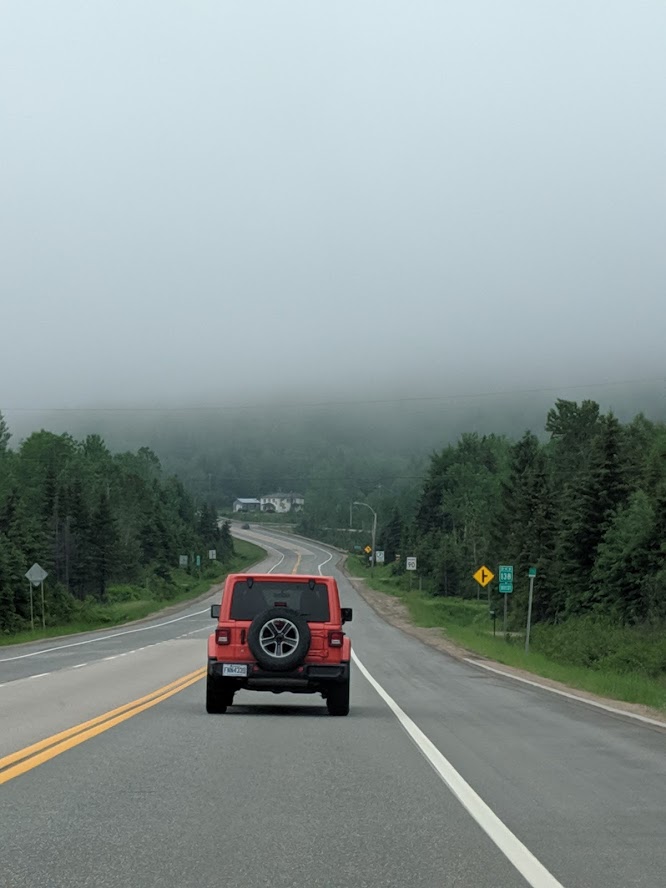 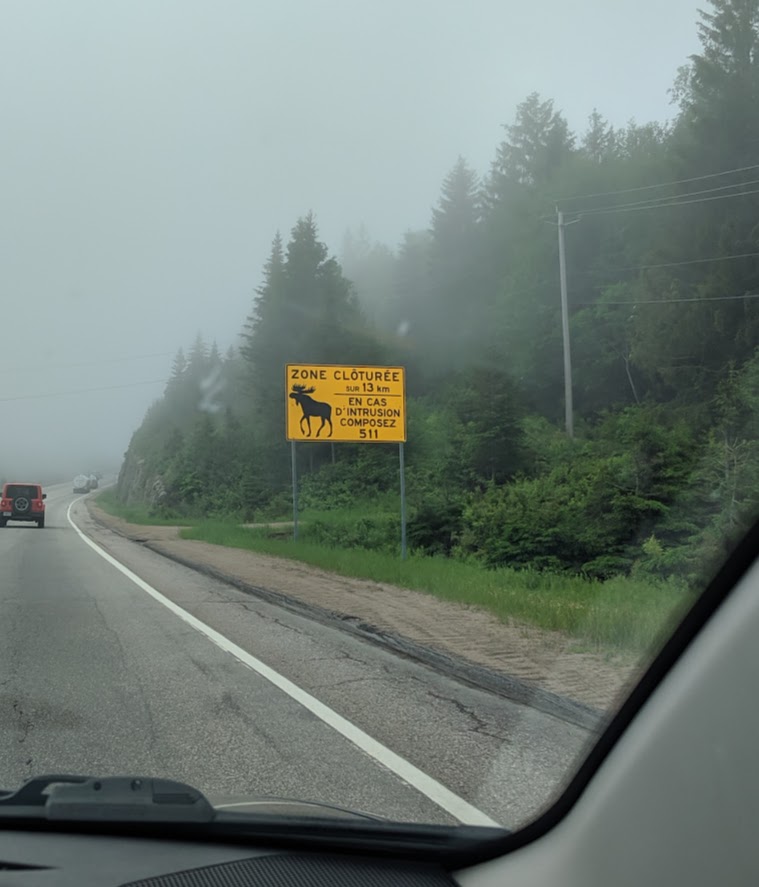